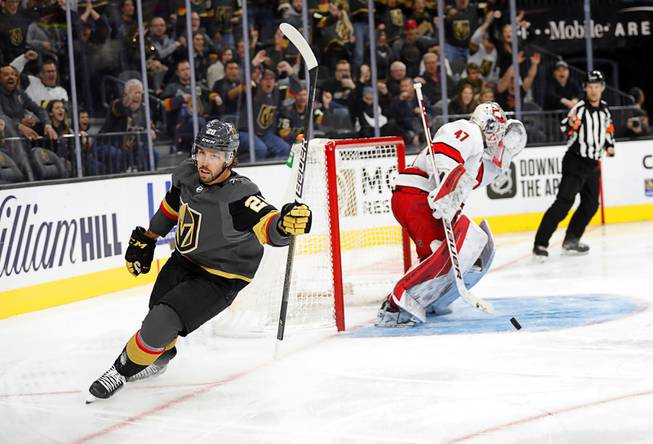 In one corner is one of the most injured teams in the league — one that added two players to the league’s COVID-19 protocol this week including its top scorer. In the other is a healthy powerhouse, the team with the best record in the league.

The Golden Knights take on the Carolina Hurricanes, which at 11-2-0 have the best record in the NHL, at 7 p.m. today at T-Mobile Arena. It’s just the 10th time Vegas has been a home underdog (plus-130), and the team will be missing top scorer Jonathan Marchessault to COVID protocols. For a team that’s handled plenty of adversity already, this will be its stiffest challenge yet.

“I think it’s a good test for our group,” Vegas defenseman Shea Theodore said. “They’ve been playing good hockey and their record shows, and it’s going to be a game where we have to continue to really just battle it out, play our style, try and shut these high-offensive teams up.”

Marchessault’s absence throws the rest of the lineup into a state of mystery. The team held an optional morning skate, so there were no line rushes. Reilly Smith and Nicolas Roy will likely stay together, but who skates as the left wing is unknown, particularly after Mattias Janmark and Chandler Stephenson took maintenance days Monday. Paul Cotter and Sven Baertschi were both recalled from the Silver Knights this morning, and both could draw in. William Carrier, who has been injured, was added to COVID protocols Monday.

Marchessault has helped keep the Golden Knights afloat in the early parts of the season. With Mark Stone, Max Pacioretty, William Karlsson and others missing, Marchessault has had to step up and did so to the tune of 13 points and nine goals. No one else has more than five goals, and only Chandler Stephenson (15) has more points.

“Those things are just another thing you’ve got to get over,” Smith said. “We have a game tonight; we have to focus on that. We wish we could have certain people in the lineup, but we don’t, and we have to move on.”

It’s unfortunate timing for the Golden Knights, who take on arguably the best team in the league. Carolina has steamrolled through its first 13 games with a league-low 25 goals allowed and league-best plus-20 goal differential. Much of that has come through the brilliant play of goalie Frederik Andersen, who leads the league in save percentage and goals saved above expected. But he is not expected to play tonight.

Even without Andersen, the Hurricanes are a force. Andrei Svechnikov leads the way offensively with seven goals and 17 points, but Sebastian Aho and Tony DeAngelo are also both above a point-per-game on average.

“I think there’s a consensus out there that these guys are, if not the best team in the league, in that conversation,” Vegas coach Pete DeBoer said. “They’re fairly healthy, they’ve been rolling through a lot of really good teams. Great test for us.”

Carolina last visited T-Mobile Arena on Feb. 8, 2020, in what was DeBoer’s first home game as Vegas coach. The Golden Knights lost that game 6-5 in a shootout and are 3-1-2 all-time against the Hurricanes. Robin Lehner, the Golden Knights’ projected starting goalie, is 0-5-0 all-time against the Hurricanes. They are the only team (except Vegas) he has not beaten in his 12-year career.

Undefeated UNLV feeling primed for showdown with No. 4 Michigan