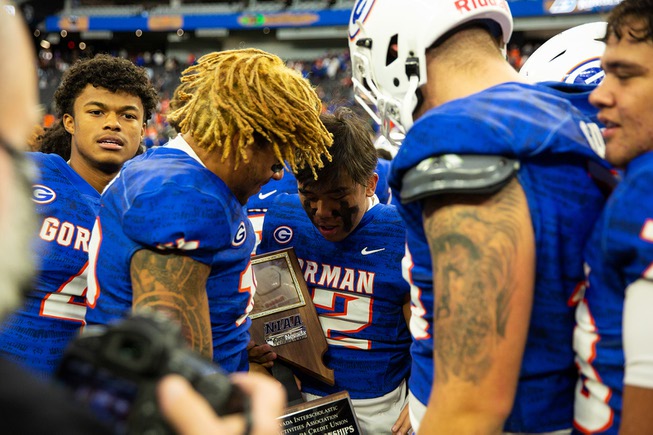 Bishop Gorman High School celebrates their 56-7 win against McQueen High of Reno in the 5A high school football championship at Allegiant Stadium on Thursday Nov. 18, 2021.

A fumble return for a touchdown from Jamih Otis. An interception to stop a scoring drive from Fabian Ross.

The Bishop Gorman football team, like it has all season, relied on its defense today in beating Reno’s McQueen 56-7 for the class 5A state championship at Allegiant Stadium.

Gorman surrendered just 100 points in 13 games this year, including a shutout streak of six straight games, in winning the program’s 11th championship in 12 contested seasons. It was the first title since 2018 after losing to Liberty in 2019 and having the 2020 season canceled because of COVID-19.

“Getting to play with these guys every week, it’s just special,” Ross said. “We are all athletes and we all work hard, that’s the main thing. We go at full speed in practice to make each other better.”

The defensive line, anchored by Aiden McComber and Noa Yamauchi, put such pressure on the opposing quarterback all season that Gorman’s defensive backs weren’t frequently pressed into action. And when they were asked to make a play, the result was similar to Ross’ second quarter interception.

He tiptoed the sideline to haul in the ball, giving Gorman another first-half possession as it scored 28 points in the second quarter to put the game out of reach with a 42-0 halftime lead.

“We joke around with the DBs that they don’t get a lot of picks,” Gorman coach Brent Browner said. “Well, that’s because there aren’t a lot of plays going their way.”

The Gorman offense did the rest.

The Oklahoma football pledge lined up at fullback and scored on a 5-yard plunge for the initial points of the game to start the Gorman domination.

“We just rose to a different level,” Browner said. “They were executing on such a high level on both sides.”

The championship was unofficially won last week when Gorman beat Liberty in the Southern Regional championship game, avenging the 2019 defeat that ended a 10-year run as the state’s best team.

The 2021 Gorman Gaels also became the first in high school in history to win a state championship at Allegiant Stadium.

“It was crazy playing at Raiders stadium,” Otis said. “I can see myself playing here again. This was my first state championship. I just soaked it all in with my teammates.”