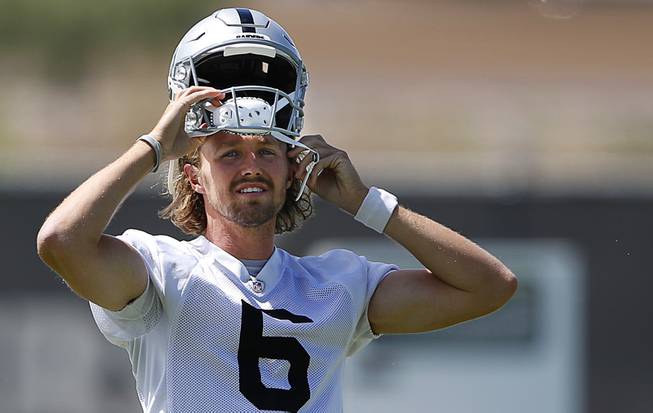 Hammers, bananas and fights: A.J. Cole has been the Raiders’ secret weapon

Las Vegas Raiders punter A.J. Cole (6) puts on his helmet during an off-season practice at the Raiders practice facility in Henderson Wednesday, June 2, 2021.

Two weeks ago, Raiders punter A.J. Cole took such a pulverizing hit in East Rutherford, N.J., that the game had to be paused while he was checked on and Giants cornerback Keion Crossen was assessed an unnecessary roughness penalty.

Last week, Cole was the one administering the punishment — making an open-field tackle on Chiefs returner Mike Hughes and forcing a fumble.

“That’s how football is: You’re either the hammer or the nail,” Cole said Wednesday. “I was the nail in New York and had to flip the script a little bit.”

For the Raiders over the course of the season, Cole has been far more hammer-like — constantly knocking opponents down into poor field position. Even though Las Vegas has lost two in a row heading into Sunday’s Week 11 home against Cincinnati, Cole has remained hot to follow a start where he was a big part of the team’s success.

The third-year veteran out of North Carolina State leads the NFL with an average punt distance of 52.1 yards, but his kicking game is not all about power. What’s more impressive to interim coach/special teams coordinator Rich Bisaccia is the way Cole has executed all different types of kicks and objectives.

He’s equally confident pinning opponents deep in their territory when the situation calls for it or skying a kick to make it difficult for certain players to set up for a return. The numbers back up Bisaccia’s praise, as Cole also sits first in the NFL in EPA (expected points added) per punt by a rather wide margin.

“I just think his brain (is sharp) of what he’s going to do, where he gets on the field, what he wants to hit,” Bisaccia said. “He’s perfected other kinds of kicks. We’ve got all kinds of names for them, from flops to bananas to fats.”

The naming is the final stage of Cole’s offseason process, which includes working with other punters around the NFL. He came into training camp with several new ideas for different type of kicks, and when Bisaccia wanted names for them all, they collaborated and came up with appropriate verbiage.

The Atlanta native had strong seasons in each of his first two years with the Raiders but has taken it up a notch this year. Bisaccia said he thought that was because Cole got stronger, but the punter described it as more complicated than that.

“You don’t want to just turn into a meathead and lose all your flexibility and try to squat like 750 pounds,” Cole said. “It’s all about being able to apply that force into the football. I think I threw a bunch of different dynamic exercises, working on my stretching, my flexibility, explosion. I think I was able to add some strength in a beneficial way this season.”

The extra muscle has made Cole more comfortable in events like last week when he made one of the Raiders’ biggest plays in the game against the Chiefs. Sure, Kansas City blew out Las Vegas anyway, but the score could have likely been an even more embarrassing 48-7 instead of 41-14 without Cole’s forced fumble.

The Raiders’ first touchdown came on the drive Cole earned with the forced fumble, which Foster Moreau recovered.

“One of our goals every week in special teams is to create a possession — you’ve got to find a way to take the ball away,” Cole said. “I don’t think when we talk about that the plan is for the punter to force a fumble, but if that’s what happens, that’s how it happens. Football is a crazy game, and you take it how it comes.”

The play has given Cole bragging rights in the specialists room this week, a tight-knit group that’s often separate from the rest of the team in practices and position meetings.

“I think I got more credibility from that hit than any other play in my career,” Cole said with a grin. “What’s funny is I’m having these constant two arguments with (kicker Daniel Carlson and long snapper Trent Sieg). My argument with Daniel is, if me and Daniel got in a street fight, who’s winning in the fight? He thinks it’s him. He’s wrong. I feel like I put some credibility onto that, and then the other argument I constantly have with Trent is, he’s bigger than me, he’s stronger than me, if we fought straight-up, he would win but if we went into a wrestling competition, but he had no thumbs, that’s what we’re getting into a lot. And I’m always asking guys on the team, ‘Who do you think would win a wrestling match, me or Trent, no thumbs?’”

Cole’s prediction for the hypothetical fight with Carlson is a “quick” and “easy” knockout, so not unlike what he’s done to opponents’ scoring chances throughout the year. He’d rather just have to kick, but in case he needs to fulfill his role as the last line of defense again, he’s now comfortable and has a mental process for the situation.

When Cole realized he needed to make a play on Hughes, for example, he was telling himself repeatedly, ‘It’s happening. Stay calm.’

College football by the odds: Vegas preview and picks of every Week 12 game