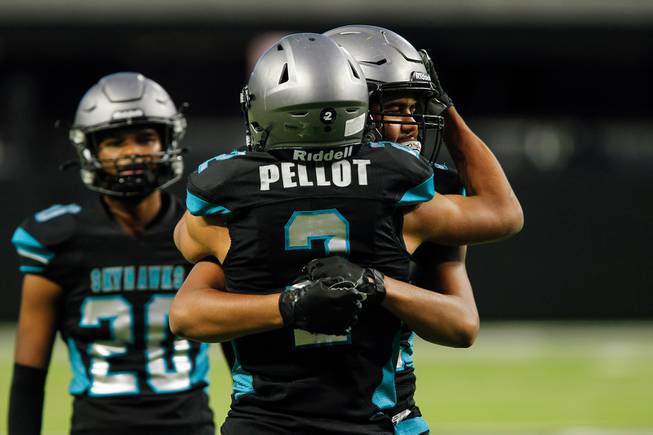 Silverado High running back Donavyn Pellot (2) celebrates with his team after scoring a touchdown in the 1st quarter of their 4A championship game against Shadow Ridge High at Allegiant Stadium Thursday, Nov. 18, 2021.

As the Silverado High football team’s lead started to grow in the state championship game against Shadow Ridge, players and coaches naturally became guarded about becoming too optimistic.

They were minutes away from winning the program’s first title and didn’t want to let up, after all.

Then, John Agounke delivered a big hit on the Shadow Ridge ball carrier, jarring loose the ball that was scooped up by Jaylen McGlothen, who raced about 30 yards for a touchdown.

Suddenly, Silverado had a 33 point lead at the end of the third quarter, and players could sense they had accomplished the previous unthinkable of becoming champions.

“After the big shot John made on their back on the sideline, I kind of started feeling it then,” coach Andy Ostolaza said. “But to be honest, time could not go any faster. It seemed to take forever.”

Silverado never trailed in the class 4A championship game at Allegiant Stadium, using five touchdown passes from quarterback Brandon Tunnell and forcing two game-changing turnovers in the third quarter to secure a 61-27 victory.

Silverado opened in 1994. This was the first championship and undefeated season.

“Obviously, we have some awesome players,” Ostolaza said. “Silverado has always been known for (its) big linemen. We had those guys again, but what made the difference was our skilled guys. They performed at such a high level, starting with our quarterback. I told you guys at the beginning of the year, he was the best quarterback in Silverado history. I thought he was the best quarterback in our entire league and he proved that tonight.”

Many of the players have been teammates since youth football, such as Tunnell and brother Bryson Tunnell, who connected for two scoring strikes. Brandon Tunnell additionally found Jaden Thrower for a pair of touchdowns, while Donavyn Pellot had a touchdown run and reception.

“All the hard work we put in, it was rewarded on this field,” Pellot said. “This feels great.”

Silverado wouldn’t have been in the championship game if it weren’t for realignment, which kept the Skyhawks in the class 4A while moving powerhouses like Bishop Gorman and Liberty to the new class 5A.

Silverado was a playoff team two seasons ago in the large-school class, when Brandon Tunnell was a freshman. But they lost in the first round and had no chance to compete with large-enrollment Liberty, the ultimate champs.

The new classification gave programs like Silverado and Shadow Ridge a chance to enjoy a playoff run, and as fate would have it, that run ended in a game at the Raiders’ new $2 billion stadium near the Strip.

Pellot said he didn’t look at the video monitors when running into the end zone, even though he probably had plenty of time to admire his work. He scored the initial two touchdowns of the game, including a 70-yard reception where he outraced the defense and walked into the end zone.

“We had so many big plays tonight, starting with our quarterback hitting so many of our receivers,” Ostolaza said.

Silverado has a legitimate shot at repeating next season. The return the Tunnell brothers, Thrower, Pellot and Caden Harris, who rushed for two touchdowns in the win.

“We have been working at this for a long time,” Thrower said. “We come out every game expecting to win. That’s what we do.”