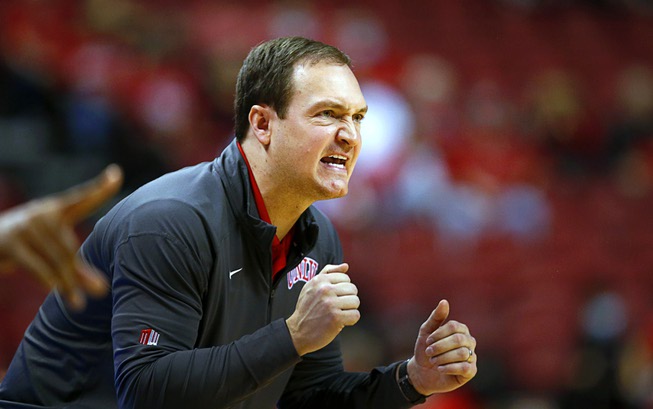 Are you ready for the biggest game of the UNLV basketball season (so far)? The team certainly thinks it’s ready, as the scarlet and gray enter Friday’s showdown with No. 4 Michigan on a three-game winning streak to open the season.

Leading scorer Bryce Hamilton and leading rebounder Royce Hamm both expressed confidence this week that Kevin Kruger’s defense-and-toughness formula is locked in already, and they seem to understand that the marquee opponent and the big stage (9:30 p.m. at T-Mobile Arena, ESPN2) will give UNLV a chance to make an early statement.

Three keys to watch as UNLV attempts to take down a Top-5 opponent for the first time since knocking off No. 4 San Diego State in 2019-20:

Competing with Michigan means finding a way to deal with sophomore center Hunter Dickinson, a 7-foot-1 force who is averaging a team-high 18.7 points and 8.0 rebounds.

Slowing down the giant lefty is going to be quite a task. Dickinson is overpowering in the paint, and he possesses incredibly soft touch; for the season, he is shooting an unreal 92.3% on attempts around the rim.

UNLV will ask senior center Royce Hamm to be the primary matchup against Dickinson. It’s not going to be easy, but Hamm has done a good job on the defensive glass this season (13.7 rebounds), and he is averaging 2.7 blocks per game.

Even with some help from double-teaming guards and wings, Kruger understands he’ll be asking a lot of Hamm on Friday.

“There aren’t many guys in college basketball as big and physical as Hunter Dickinson,” Kruger said. “It’s one of those things you can’t replicate and you’re hoping that Royce’s experience as much as anything he can tap into that, just seeing him play against bigger guys throughout his career.”

Michigan is not unbeatable. The Wolverines showed some vulnerabilities in a 67-65 loss to Seton Hall on Tuesday, and UNLV could be capable of exploiting those flaws.

Most notably, Michigan is not a deep team. Only seven players logged double-figure minutes on Tuesday, with backcourt starters Caleb Houstan and Eli Brooks seeing 39 and 38 minutes, respectively. Dickinson pushed the upper limits of his stamina with 33 minutes.  Seton Hall, on the other hand, went nine deep; no one played more than 28 minutes, and the Pirates looked like the fresher team in the second half.

UNLV can run out lineups in waves, and we’ve seen Kruger rotate freely in all three games so far this season. Nine players are averaging between 12 and 29 minutes, with 10th man David Muoka right there at 9.7 minutes.

Look for Kruger to substitute liberally in the hopes they’ll be able to grind down Michigan with tough defense over the course of 40 minutes.

Like the majority of college basketball games, there’s a good chance this one could be decided simply by which team makes more 3-pointers.

Neither squad is shooting the ball with any accuracy this season; UNLV has hit 3’s at a horrific 21.9% this year, while Michigan clanked to the tune of 3-of-15 against Seton Hall. Both teams expect more from their shooters.

UNLV imported three transfer guards this offseason to bolster its outside attack, and so far Josh Baker (1-of-9 3FGs), Mike Nuga (2-of-12) and Justin Webster (1-of-5) have not delivered. If those three can find their stroke on Friday and Michigan continues to miss, UNLV will find itself with a chance to steal a very important win.