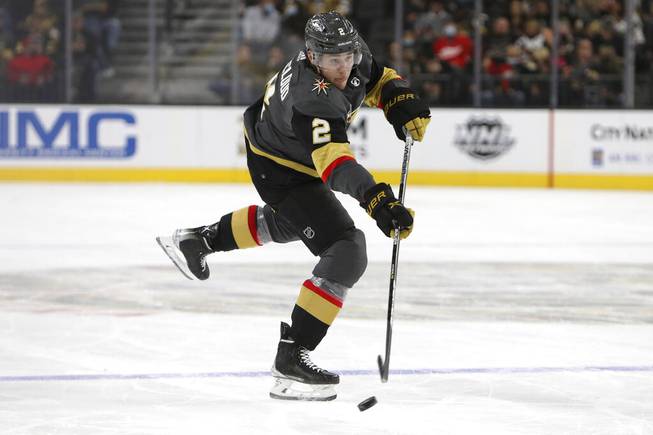 The Vegas Golden Knights defenseman returned to action on Thursday after missing the previous 12 games with a hand injury and immediately provided an offensive spark, tallying two goals to propel the shorthanded Knights over visiting Detroit, 5-2.

Taking the ice with three players on the COVID list and another handful on the injured list, the Knights found a way to patch together an offensive outburst in the second period. Nicolas Hague got the scoring started early in the period; Alex Pietrangelo’s shot from the point was stopped by Detroit goaltender Thomas Greiss, but Hague swooped across the crease to bang in the rebound and make it 1-0.

Two minutes later Mark Stone generated a turnover in Detroit’s zone and gained control of the puck. Stone zipped a pass across the ice to Whitecloud, who settled it and fired a wrister past Greiss from the bottom of the circle to extend Vegas’ lead to 2-0.

Detroit cut into the lead midway through the period when Givani Smith battled through a pileup in front of the Vegas net and swept a rebound past Golden Knights goaltender Robin Lehner, but Whitecloud got it back immediately by scoring his second goal of the night.

Nicolas Roy won a faceoff in the right circle and was able to draw it back to Whitecloud. With a clean look at the net, Whitecloud fired a wrister to the top corner over Greiss’ outstretched glove.

Whitecloud came into the game with two career goals.

“It was exciting to get back in, obviously,” Whitecloud said. “When you’re injured for an extended period of time, or any time you’re away from the boys and the regular schedule, you start to miss that. Sitting up in the press box, you just want to get playing as quick as possible. It’s exciting to be back contributing and helping out as best I can.”

Paul Cotter gave the Knights a 4-1 lead with a goal in the final minute of the second period, and Reilly Smith salted it away with 15 minutes left in the third period. Receiving a pass from Mattias Janmark, Smith came across the blue line alone and deked goalie Alex Nedeljkovic (who replaced Greiss after the second period) before lifting a backhand shot into the net.

“I think we did a good job getting scoring from a lot of different people tonight,” Smith said. “We need that because you have people going down—it seems like every day there’s someone new. So guys coming into the lineup like Cotter did and jump in and score a timely goal, it helps us.”

The win improved Vegas to 10-7-0 on the season. The Golden Knights have 20 points and currently sit in fourth place in the Pacific Division.