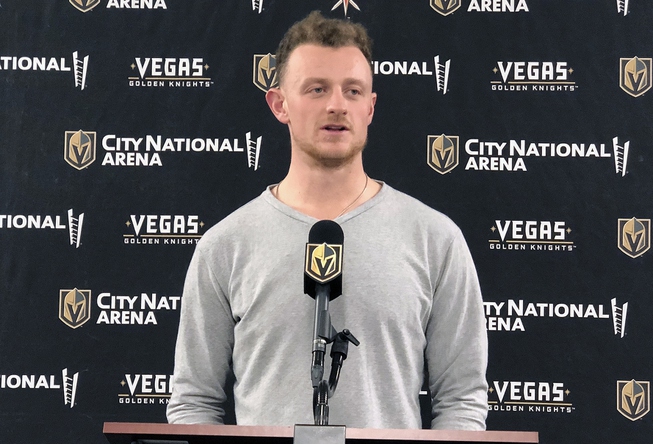 How will the Golden Knights use their newest star player?

The Vegas Golden Knights have done it again. They went out and got another superstar, adding to their ever-growing collection by bringing in Jack Eichel, the former No. 2 overall draft pick by the Buffalo Sabres who’s regarded as one of the best centers in the world.

It might go down as the most impactful move they’ve ever made, and the only difference from similar blockbusters that brought the likes of Mark Stone and Max Pacioretty to town is that it requires a wait. It will be at least three months until Eichel plays for Vegas after he underwent artificial disk replacement surgery November 12 in Denver.

But when he does get on the ice, how much better will he make a Vegas team that already came into the season as a Stanley Cup favorite? The answer to that question has the current roster teeming with excitement.

“Jack can change the game in a blink of an eye, and that’s an element you want on your team,” defenseman Alex Pietrangelo said.

The 25-year-old Eichel is actually a few months younger than Alex Tuch, part of the package for which he was traded, alongside with Peyton Krebs and draft picks. Eichel is a bona fide No. 1 center, which aside from William Karlsson’s career year in 2017-18, Vegas has arguably never had.

The Golden Knights acquired stars on the wing such as Pacioretty and Stone to augment the forward group but hadn’t found the key pivot that’s the centerpiece of so many Stanley Cup champions. Until now.

Eichel is so good that general manager Kelly McCrimmon insists his availability changed the team’s plans. The Golden Knights’ front office made moves to clear cap space in the summer, but then spent it, so it’s not like the trade of Marc-André Fleury to Chicago came in anticipation of Eichel.

McCrimmon said he simply acted and didn’t worry about the eventual details when it became clear he could acquire Eichel. Vegas technically doesn’t have the cap space for Eichel at the moment, but it doesn’t matter since he’s on injured reserve.

The team will almost surely need to move players off the roster in order to fit his $10 million cap hit when he’s ready to return, which could be as early as February. But it’s hard to argue any shifting won’t be worth it.

“There’s no question about the caliber of player he is,” forward Mattias Janmark says. “If there’s anyone who can challenge [Edmonton Oilers center Connor] McDavid, it would be a guy like him.”

So where will he play in Vegas? He’ll immediately improve any line, and the thought of him centering Pacioretty and Stone has Vegas fans frothing at the mouth.

Those three would form the most talented line Vegas has ever iced and would give Colorado’s Gabriel Landeskog-Nathan MacKinnon-Mikko Rantanen trio and Boston’s Brad March-Patrice Bergeron-David Pastrnak combination a run for their money as the best in the league.

And that might not even be the Golden Knights’ best option.While Chandler Stephenson isn’t what most consider a true No. 1 center, he has produced at an elite rate between Pacioretty and Stone. Those three together have been so dominant that it’s worth considering keeping them intact and letting Eichel super-charge another line.

There are a lot of options if the Golden Knights decide to go that route. Eichel could center players like Jonathan Marchessault and Reilly Smith, playing the driving role he did for years in Buffalo with far less talent around him.

Or what about a line with Eichel between Pacioretty and Evgenii Dadonov while letting Marchessault and Stone flank Karlsson? That would move Stephenson to a third-line role, where he’d be a big asset. The point is, when dealing with a player like Eichel, there isn’t a wrong answer.

For now, coach Pete DeBoer isn’t giving any clues as to his thought process. “I’ll leave that to you guys for the next few months,” he told reporters with a grin. “Who knows what’s going to be available in three months or four months when he gets back.”

The past decade of Stanley Cup champions help illustrate the importance of an elite center. Current back-to-back champs Tampa Bay had Brayden Point and Steven Stamkos. St. Louis had Ryan O’Reilly for its 2019 title year, and Washington had Nicklas Bäckström in 2018.

Now Vegas has Eichel, whose name would absolutely fit with those players based on his early career production.

Since reaching the Stanley Cup Final in 2018, the Golden Knights have acquired wingers (Pacioretty and Stone), a goalie (Robin Lehner) and a defenseman (Alex Pietrangelo) in a push to get back and win it this time around.

They never had that center until they brought in Eichel, one of the best players in the world at the sport’s most important skating position. It’s easy to envision him becoming the piece that pushes Vegas over the top.

UNLV basketball fades in loss to No. 4 Michigan