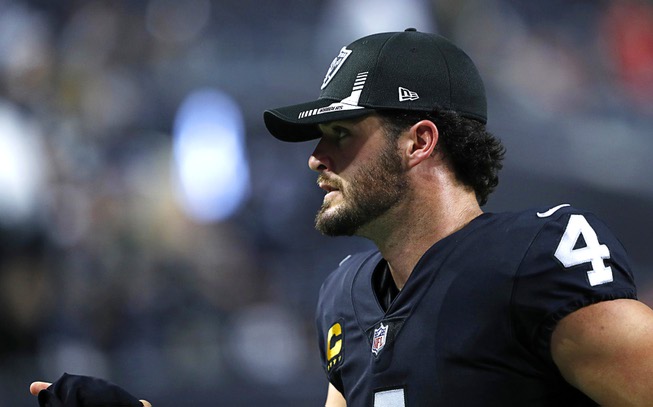 Raiders quarterback Derek Carr found himself making a surprise admission on a phone call with his older brother Darren Carr earlier this week.

When the topic turned to the Raiders’ season, Darren might have expected Derek to be down with the team riding a two-game losing streak to fall to 5-4 on the year after a blowout loss to the Chiefs. But Derek said talking through it helped reinforce how “excited” he was for the second half of the Raiders’ season.

“I was like, ‘I love these moments,’” Derek recalled earlier this week. “It’s weird, but I love it. It’s adverse, you’re still in it. That’s what you sign up for, to compete. So, the state of it is, we’re ready to compete.”

Las Vegas feels like it’s been written off as a postseason contender despite a hot start to the season, and it’s not just all in their heads. That’s been the consensus heading into a 1:05 p.m. kickoff Sunday against the Cincinnati Bengals at Allegiant Stadium where the Raiders have flipped from a small favorite a week ago to a small underdog by the betting lines.

Last week’s 41-14 defeat to the Chiefs also dropped them from first to third in the AFC West and out of the current playoff picture. The week-to-week theater of NFL takes has ensued, and now there’s as much talk about the Raiders dismantling their team and rebuilding in the offseason than potentially turning it around this year.

“I hate to be put in a situation where we go out there and didn’t play to the best of our capabilities, especially on national TV,” running back Kenyan Drake said. “Now you’ve got all this outside noise. People ask, ‘maybe it’s the distractions we’ve had throughout the entire season, is it kind of coming to fruition to where we’re not going out there and playing our best ball?’ The only way we shut up those critics is going out there and continuing to play the way we know how to play.”

The Raiders understand why there’s an inclination to conclude that their downturn is the result of the draining mental circumstances of the last six weeks. Dealing with one of the Jon Gruden scandal, the Henry Ruggs tragedy or the Damon Arnette controversy would have been a lot — but they’re left trying to navigate all three.

Derek Carr, an eight-year captain, was ready to help his team through the process regardless but said there hasn’t been as much negativity or as many challenges with keeping teammates focused as some may expect. On the contrary, he said there’s been a determination to improve.

He’s usually one of the first to arrive at the team’s Henderson headquarters, but on Wednesday when the Raiders started preparations for the Bengals, Carr said a number of players were already in the building when he got there. Fellow captain and running back Josh Jacobs gave a similar report when asked about the team’s mindset.

“That’s probably the best thing I’ve seen this year on our team is guys still coming to work, trying to get better,” running back Josh Jacobs said. “No one is really complacent on the team. You see the way they work.”

It wasn’t always this way, according to Derek Carr. He’s been a part of teams without winning records in six of his previous seven seasons with the franchise and has seen a “woe is me…here we go again” attitude prevail in the past.

The quarterback didn’t specify which years he’s seen mentalities crash along with the team’s record, but the Raiders have slipped to disappointing finishes after promising starts in each of the last two years. They lost four in a row after a 6-4 start in 2019, and then last year followed a 6-3 opening to the season by falling in five of their next six games.

They’ve been sick of questions regarding why this year will be different since the beginning of the season, but Carr is adamant that this year’s team is indeed different.

“You watch the tape the last two weeks and we say, ‘O.K, this what we need to do — Boom, that and that,’” Carr said. “And you see it and you try to rep it, you try to replicate it in practice and be better in certain situations. So, the message to the team is simple: We’ve got to keep doing what we do. It’s won us five games. We definitely planned on having more than that, that’s for sure, but as (former coach Jack) Del Rio used to say, ‘That’s what you’ve earned.’ You are what you’ve earned in this league, and that’s what we’ve earned. What we’ve earned is a really close race. There is a lot of teams sitting there with similar records.”

The Bengals are one such example, as they have an identical 5-4 record and are tied with the Raiders as the first team currently out of the playoffs. Interim coach Rich Bisaccia has stressed focusing in on Cincinnati to his players as the surest route to bouncing back from their recent losses.

He wants Las Vegas to not “spend too much time” in the telescope and make like a microscope. If they can avoid widening their lenses and instead zone in on the task at hand, the Raiders are confident they’re not as helpless as they’re being made out to be.

“We’ve got to go prove it,” Carr said. “We definitely have the guys in the room to be able to do it.”

How will the Golden Knights use their newest star player?