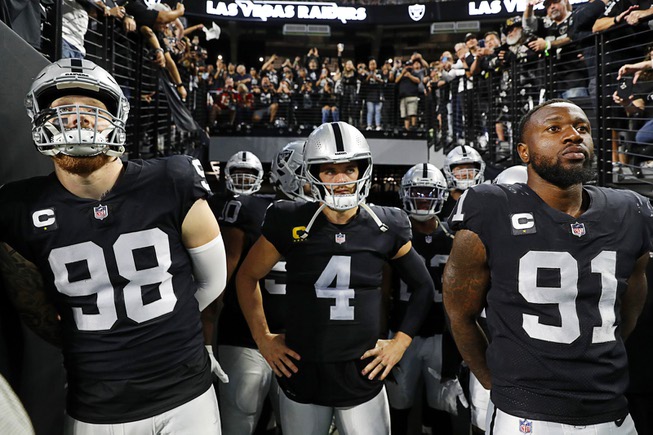 Three weeks ago, Cincinnati and Las Vegas were the top two seeds in the AFC playoff picture. It’s been all downhill from there for both sides. Neither the Bengals nor the Raiders have won since then, and now sit as the first two teams outside of the seven-team AFC postseason projection. Their paths have mirrored each other, as they both fell from grace with an upset loss in New Jersey — the Jets beat the Bengals while the Giants downed the Raiders — before getting blown out in by a division rival — the Kansas City Chiefs battered the Raiders while the Cleveland Browns crushed the Bengals. Their declines and head-to-head jockeying for playoff positioning make this matchup look much more significant than it appeared coming into the season. Given the stakes, and the fact that the Bengals are coming off their bye, the Raiders are expecting the most out of their opponent.

Some version of this seems like it’s the favorable matchup every week, but there’s no getting around that the Raiders’ pass rush has been the team’s most consistent advantage all season. Edge rushers Maxx Crosby and Yannick Ngakoue are having Pro Bowl-caliber seasons, and the Bengals’ offensive line is not equipped to handle them. Cincinnati’s line has improved from last year when it was the consensus worst in the league — at least in pass protection. The Bengals rate 25th in allowing sacks on 7.63% of plays, but their past two games have been their worst as defenders have sacked Joe Burrow a combined eight times. Run blocking is even more of a problem as the Bengals rate last by power success rate, according to Football Outsiders. Therefore, Raiders linemen like Johnathan Hankins and Quinton Jefferson could be as disruptive as Crosby and Ngakoue.

“If you try to put blame on one particular thing, it ends up being a side street to a solution, and we try not to do that.” — Interim coach Rich Bisaccia on what problems he’d most like addressed out of the two-game losing streak

“Maybe someday I’ll write a book and rank all my receivers. That would be fun.” — Quarterback Derek Carr when asked about working with Hunter Renfrow

“Like Anchorman style if we all met up at a park? I think we would definitely have one of the stronger units. Daniel (Carlson) is massive for a kicker, so I think we’d have a really strong chance in an all-out special teams brawl.” — Punter A.J. Cole on a hypothetical fight involving the specialist units (punters, kickers, long-snappers) of all NFL teams

“I coached with Joe (Burrow)’s dad, Jimmy Burrow, at North Dakota State, so I’ve known the family for many years and known Joe. Obviously, I think he was in seventh grade when they left but I know how competitive Joe is.”— Bradley on his personal connection to Burrow

When a team gets exposed in an area one week, it can be all but certain to get challenged in a similar fashion the next week. Kansas City created mismatches with its top receiver, Tyreek Hill, in a 41-14 victory in Las Vegas and Cincinnati will likely try to emulate the Chiefs’ success with Chase, a favorite to win Offensive Rookie of the Year. Chase has racked up 44 receptions for 835 yards and seven touchdowns. Las Vegas was lucky to avoid Hill converting more deep shots, but he tore the Raiders up on intermediate routes in between zones of their Cover 3 defense. Chase came into the league known as a deep threat, and the Bengals will try to get him behind the Raiders’ defense on occasion, but he’s been far more than just that through the first nine games of his career. He’s not easy to defend in any capacity.

The Chiefs ruthlessly targeted strong safety Johnathan Abram in last week’s game, but mostly tried to stay away from Moehrig. That’s a testament to how well the rookie second-round pick has played at the back of the Raiders’ defense. There was one play he’d certainly like back from last week, however, as Moehrig dropped a sure interception just outside the end zone. After losing the turnover battle in back-to-back games, the Raiders are placing an emphasis on flipping it in their favor against the Bengals. They should have opportunities to pick off Burrow, whose 11 interceptions is tied with Carolina’s Sam Darnold for most on the year. Moehrig got his first career interception to all but clinch a victory in Denver last month, and he’s as good a bet as anyone on the defense to snag another against the Bengals. The keys will be maintaining his stellar level of play and keeping up with Chase on vertical routes.

That’s the league-leading number of tackles by linebacker Denzel Perryman, who has become the linchpin of the Raiders’ defense since arriving in a trade from Carolina in training camp. Wrapping up and finishing tackles will be vital this week, given that running back Joe Mixon ranks second in the NFL with 14 broken tackles and fifth with 308 yards after contact. Raiders defensive coordinator Gus Bradley said he was confident the team’s tackling was improving all season until last week. The Chiefs regularly ran through initial contact and added extra yards. If anyone can set the tone to fix the mistakes, it’s Perryman.

Best Bet (5-4 this season): Joe Burrow to throw an interception

The “yes” on the “Will the Joe Burrow throw an interception?” prop is available at as low as even money. That seems inaccurate for a player who averages more than one interception per game and has only gone two games this season without throwing one. The Raiders have just four interceptions, but they’ve been in position for more. Bradley says the Raiders have dropped six interceptions this year. That’s usually more indicative of bad luck than a fundamental, underlying problem. Burrow is aggressive and often faces a collapsing pocket. Las Vegas will make an effort to prolong his turnover woes.