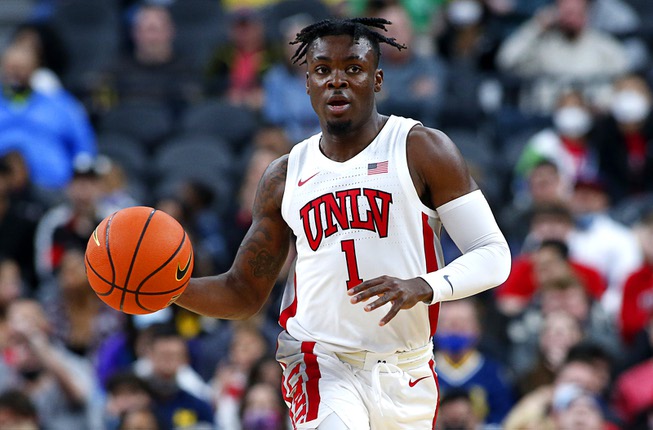 Just 48 hours after an encouraging but ultimately disappointing loss to No. 4 Michigan—the dreaded “moral victory”—UNLV is back in action on Sunday in the consolation bracket of the Main Event, taking on Wichita State (9 p.m., ESPN2).

Three keys for the scarlet and gray:

Kevin Kruger rode his starters against Michigan, and he rode them hard. The starting lineup of Jordan McCabe, Mike Nuga, Bryce Hamilton, Donovan Williams and Royce Hamm combined to log more than 22 minutes together in Friday’s 74-61 loss, which is an astounding amount of court time for any lineup in a single game. And it worked—to an extent.

While the starters played Michigan to a virtual standstill (the Wolverines outscored them, 37-35, after UNLV gave a meaningless foul with three seconds remaining), the bench contributed next to nothing. The reserves attempted only two shots for the entire game, and it was clear Kruger was avoiding going to his depth pieces in order to keep them from getting exposed.

After leaning on the starters for such intense minutes, Kruger will probably be more inclined to use his bench 48 hours later against Wichita State. In particular, guards Marvin Coleman and Justin Webster (who played just two minutes apiece against Michigan) should return to the regular rotation. If they can make a few shots between them, it will alleviate some of the pressure on the starters and make the scarlet and gray a more well-rounded team.

Get to the rim

UNLV has been one of the worst teams in the country so far this season when it comes to generating shots around the rim; just 27.0 of their attempts have come around the basket, which ranks No. 341 out of 358 teams, according to Hoop-Math.com.

Some of that shot distribution is to be expected when the team’s high scorer, Bryce Hamilton, is a mid-range artist, but the scarlet and gray need more easy looks at the hoop. Wichita State could be just what the doctor ordered in that regard, as the Shockers play very small and allow opponents to attempt 41.5% of their shots from close range, which ranks them No. 312 in the nation.

Can Hamilton, Nuga, Williams and the team’s other slashers eschew jumpers and force their way to the rim? In this game, UNLV would be better for it.

UNLV lost for the first time on Friday. It was the team’s first loss under Kruger, and after a 3-0 start it will be interesting to see how they respond to their first taste of defeat.

It shouldn’t be an issue—this team has already made effort and intensity a hallmark of their playing style—but it’s worth monitoring. If the scarlet and gray come out with energy and play well against a quality opponent in Wichita State, that will be a good sign for the prospects the rest of the season.