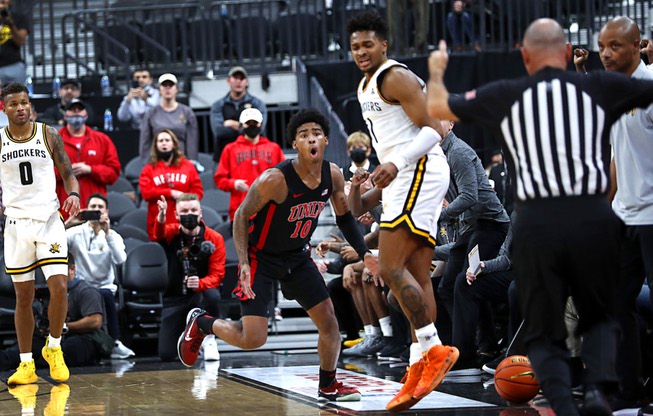 UNLV Rebels guard Keshon Gilbert (10) reacts as he is called for a foul on Wichita State Shockers guard Tyson Etienne (1) with 3.4 seconds left in the second half of a game in the Roman Main Event basketball tournament at T-Mobile Arena Sunday, Nov. 21, 2021.

UNLV is largely a veteran team by college standards, with a starting lineup made up of four seniors and one junior. The bench is plenty seasoned, too, as pretty much everyone in the 10-man rotation has at least two or three years of college experience.

There is one true freshman on the roster, though, and he won the game for UNLV on Sunday. And then seconds later he made a rookie mistake that gave it away again.

Wichita State may have taken advantage of Keshon Gilbert’s last-second foul to down UNLV, 74-73, at T-Mobile Arena, but after the game head coach Kevin Kruger stood by his only freshman, who played a huge part in keeping UNLV close down the stretch.

“Keshon is a fighter,” Kruger said.

That much was apparent on UNLV’s second-to-last possession.

Trailing 72-71 with 10 seconds remaining, senior guard Bryce Hamilton drove the lane and missed a contested floater in the paint. Gilbert, who was parked in the near corner as Hamilton released the shot, crashed along the baseline, grabbed the rebound in a crowd and put it back in off the glass to give UNLV the lead with 5.5 seconds remaining.

It was a remarkable play by Gilbert, displaying awareness beyond his years and a flair for the dramatic. And it was the third time the 6-foot-4 guard scored on a putback in the second half, accounting for three of UNLV’s 10 field goals in the final 20 minutes.

“That was a great play by Keshon there at the end,” Kruger said of the putback. “That was great awareness.”

It should have made Gilbert the hero.

After a timeout, however, Wichita State inbounded to hot-shooting guard Tyson Etienne in the backcourt and Gilbert picked him up—a little too aggressively.

With UNLV over the double-bonus, Gilbert crowded Etienne along the right sideline as he dribbled across halfcourt. Contact was made and a foul was called more than 30 feet from the basket with 3.4 seconds remaining.

Etienne, who tortured UNLV with 23 second-half points, went to the free-throw line and calmly sank both to give the Shockers the lead. UNLV was unable to get off a shot on its final possession.

It was a heartbreaking sequence for the scarlet and gray and a harsh lesson for a freshman who has already established himself as a future building block for the program.

Gilbert has had success pressuring opposing ball-handlers this season, to the point where it has quickly become his calling card. He even forced a turnover earlier in the game by pressing up on his man and forcing a bad pass. But on the final play his aggressive nature went a fraction too far.

Kruger said that kind of tough defensive edge is in Gilbert’s DNA, for better or worse. And it sounds like Kruger expects that ratio to tilt heavily toward “better” as Gilbert gains experience.

“He’s a competitor,” Kruger said. “He plays with kind of a childlike innocence that he just runs around and has fun. Fun for Keshon is competing. It’s getting in little scraps for loose balls—that’s what he enjoys doing. And he brings that. He brings an element of that to this team.”

Gilbert played a season-high 17 minutes and was on the court to close out the game because senior point guard Jordan McCabe fouled out with two minutes to play.

McCabe praised Gilbert not so much for his eight points, his one block or his one steal, but for playing to win—even if it resulted in a touch foul on the most important play of the game.

“I was extremely proud to watch Keshon go out there and do what he did,” McCabe said. “He grew up a lot tonight.”

UNLV is now 3-2 on the season after dropping back-to-back games to Michigan and Wichita State. They’ll host Whittier on Wednesday, then welcome No. 2 UCLA to the Thomas & Mack Center on Saturday.

They seem to believe their only freshman will learn from this.

“A lot of times, with Keshon being the only teenager we have, he feels like he has to fight for the respect of the older guys,” Kruger said. “These guys played in the Big 12, they played a lot of college basketball at other schools. He knows he’s got to fight for his seat at the table and he does that. He does it every day. He is the same exact person he is in practice that he is in games.”

Raiders have little time to recover from latest ‘terrible’ performance