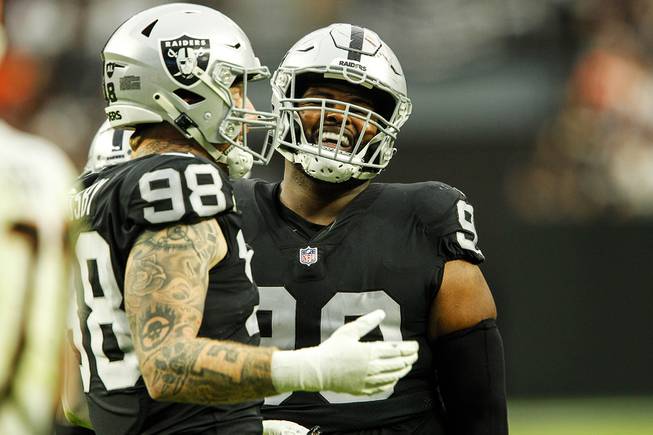 Las Vegas Raiders defensemen Maxx Crosby (98) and Johnathan Hankins (90) react after a play against Cincinnati in their game at Allegiant Stadium Sunday, Nov. 21, 2021. The Bengals lead the Raiders 10-6 in the first half.

NEW YORK — The NFL has filled the blanks for its previously scheduled Week 15 Saturday doubleheader by moving the Raiders at Browns and Patriots at Colts from Sunday.

Las Vegas will be at Cleveland at 4:30 p.m. EST on Dec. 18, followed by New England at Indianapolis at 8:20 p.m. Both games will be televised by NFL Network.

The three other games that potentially could have been moved will remain on Sunday, Dec. 19. They are the Jets at Miami, Washington at Philadelphia, and Carolina at Buffalo.

NFL schedule makers frequently place games on Saturdays in mid-to-late December when college football’s regular season has concluded. On Christmas Day, also a Saturday, the league will have Cleveland at Green Bay, followed by Indianapolis at Arizona.