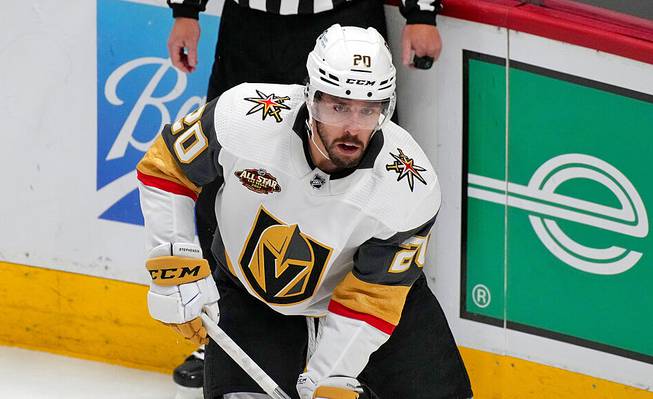 5 reasons why Golden Knights fans should be thankful

Golden Knights center Chandler Stephenson is shown during a game Oct. 26, 2021, in Denver. Stephenson has been a productive fixture on the top lines even without Mark Stone and Max Pacioretty.

Every team deals with injuries, but the Golden Knights have been ravaged more than most this season.

Yet, Vegas is right in the thick of the Pacific Division race, with reinforcements on the way. That’s a reason for their supporters to be thankful, as the team has weathered the storm and is still considered one of the favorites to win the Stanley Cup.

Here are other reasons to be thankful:

The ‘next man up’ mentality

The Golden Knights have cycled through nearly every line combination and blue-line pairing at their disposal, having to fill the void of losing their top four forwards and four defensemen.

They’ve made due with the likes of Paul Cotter, Jake Leschyshyn and Jonas Rondbjerg — all of whom made their NHL debuts, and all of whom have scored goals.

The moniker of the Golden Misfits from the inaugural year may be long gone, but the attitude has remained the same: play hard when given the chance.

Another reliable presence in net

Trading any starting goalie, much less the reigning Vezina Trophy winner destined for the Hall of Fame, carries some risk. The Golden Knights had a succession plan ready for Marc-Andre Fleury’s departure, and so far it’s gone precisely as expected.

Robin Lehner has been, quite simply, one of the best goalies in the NHL.

His .913 save percentage has been good this year, but like his subpar 3.01 goals-against average, it doesn’t come close to telling the story of his season. The Golden Knights have been one of the worst defensive teams in the NHL and Lehner has shouldered the load in keeping them in games.

Before a rough outing in St. Louis on Monday (a season-worst 2.42 goals allowed below expected, according to Evolving Hockey), Lehner had over 10 Goals Saved Above Expected, putting him on a pace that would have led the NHL last season. By that metric, he’s had as many games where he’s saved 1.5 goals more than expected (5) as games where he’s allowed any below expected.

The Golden Knights have given up shots and scoring chances at a rate they never have in the team’s five-year history. If it weren’t for Lehner, their record likely wouldn’t be anywhere near where it is.

Stephenson has proven to be the perfect complement to Mark Stone and Max Pacioretty, who have each raved about his speed and defensive abilities allowing them to reach their peak potential.

And when Stone and Pacioretty were each injured in the second game of the season, Stephenson continued to produce with 10 goals in 12 games during their absences. That led the team in both assists and points.

Stephenson’s acquisition in 2019 for a fifth-round pick remains a coup. He’s centered the best wingers on the team, and proved capable of playing top-line minutes without them too.

He’s signed for two more years after this one with a cap hit of $2.75 million, which Vegas is more than happy to take.

Offense from the defense again

A calling card of the Golden Knights in past seasons has been the ability to get goals from the back end. Vegas has been in the top half of the league in goals by defensemen in every year of its existence, including leading the NHL with 36 in 56 games last year.

They’re right back at the top again this season, with 14 goals in 20 games that ranks second in the NHL, and 50 points to rank third. Alex Pietrangelo and Shea Theodore are, predictably, leading the way with 11 points and three goals each. Nicolas Hague also has three goals.

All nine of the defensemen who have appeared have recorded at least a point and six have scored — and that doesn’t include Alec Martinez, who has not scored yet but led the blue-liners with nine goals last season.

If you like what you’re seeing out of the Golden Knights now, wait until they fully level up.

Remember, they have gone most of the season without Stone, Pacioretty, Karlsson, Nolan Patrick and Zach Whitecloud, and have also gone large stretches without Jonathan Marchessault, Martinez, Mattias Janmark and William Carrier.

Even Alex Tuch was hurt and didn’t play a game before he was traded.

The fact that Vegas (11-8-0) has won more games than it has lost through 20 games is a minor miracle. They’re operating with a lineup that has used two waiver-wire pickups, a midseason free-agent signing and six players who have made their NHL debuts.

The 33 players used is two shy of the team record for a whole season — and we’re less than a quarter of the way through this one.

Once this team gets healthy, it’s exciting to think how good it can be. And once all those players return, it doesn’t even include one of the best centers in hockey. Vegas is hanging around a postseason spot, and Jack Eichel hasn’t played a shift for them yet. That’s something for Golden Knights fans to be thankful for.

Take a Lap: Michael or Mike? Nuga makes the call