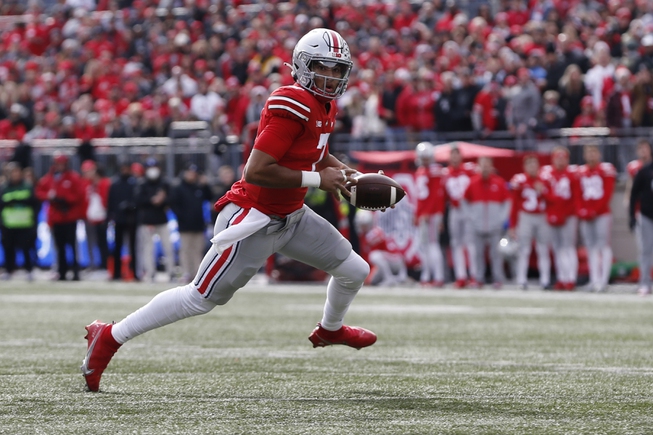 College football by the odds: Vegas preview and picks of every Week 13 game

A savior has emerged for what’s been a disappointing, if not dreadful, college football regular season betting-wise. C.J. Stroud is that savior.

The Ohio State freshman was our top play to win the Heisman Trophy at 16-to-1 to coming into the season. Now he’s a -265 (risking $2.50 to win $1) favorite to win college football’s most prestigious award at Circa Sports after a six-touchdown performance in a 56-7 win over Michigan State last week.

Alabama quarterback Bryce Young is the only other threat still in the conversation, and he’s available at +220 (risking $1 to win $2.20). For those who followed the column’s advice and fired on Stroud, it might be worth hedging with a small play on Young at that price.

This is the last full slate of the season, but between the postseason and future positions, there’s still plenty of opportunity to get the ledger into the black. Stroud could lead the way.

Read below for picks on every Week 12 game. Lines are the best available at publication time in Las Vegas on the chosen side. Picks are labeled with three separate confidence categories

Boise State -3 at San Diego State, over/under: 44.5. I’m sitting on a 12-to-1 San Diego State conference future and thought this matchup may present to an opportunity to arbitrage. The number has made that impossible, however, as it looks like a gross overestimation of Boise State. The Aztecs have been the better team, and should be a slight favorite. Lean: San Diego State +3.

Ohio State -8.5 at Michigan, over/under: 63.5. Ohio State’s incredible performance last week has added a couple points to this spread. Maybe the Buckeyes continue on their trajectory and blow out another opponent, but a good way for a bettor to go broke in the long term is by backing teams when they’re at their peak in the market. Lean: Michigan +8.5.

Alabama -20 at Auburn, over/under: 56. Auburn is in the middle of a complete collapse, but if anything could break the Tigers out of it, it would seem to be a game against their archrivals. This number was trending about a touchdown lower a couple weeks ago, and though some upward movement is necessary, it might have gone too far. Guess: Auburn +20.

Penn State pick’em at Michigan State, over/under: 51.5. The Nittany Lions’ midseason slump was in large part because of a rash of injuries that are now cleared up. The Spartans, meanwhile, saw a significant injury report lengthen out of the loss to the Buckeyes. Lean: Penn State pick’em.

Wisconsin -6.5 at Minnesota, over/under: 38.5. Over the second half of the season, Wisconsin has outgained opponents by nearly 3 yards per play. If the Badgers’ power rating was weighted slightly more towards recent results, they’d be one of the best teams in the nation — and have a point spread here on the other side of 7. Play: Wisconsin -6.5.

Oklahoma +4.5 at Oklahoma State, over/under: 50.5. Despite recent results, which indicate the Cowboys are a deserved favorite here, there’s still a talent discrepancy in the Sooners’ favor. It’s that way almost every year, which is the biggest reason Oklahoma has won seven straight in the series. Play: Oklahoma +4.5

Iowa -1.5 at Nebraska, over/under: 41. The Cornhuskers are the best 3-8 of all-time, which should come as no surprise to anyone who has watched them. They’ve been every bit as efficient as Iowa overall despite so many late-game letdowns and shouldn’t be a home underdog here. Play: Nebraska +1.5.

Florida International +10.5 at Southern Miss, over/under: 45.5. The opportunities to fade teams that have totally bottomed out, if not quit on the season, don’t come around all that often. One such opportunity is here with the Golden Panthers, which have lost by an average of 36 points per game the last four weeks and look lost since the firing of Butch Davis. Play: Southern Miss -10.5.

Virginia Tech +7.5 at Virginia, over/under: 62.5. This is quite the large adjustment for the Hokies being without recently fired coach Justin Fuente, as this line projected around 3 for most of the year. Play: Virginia Tech +7.5.

Arizona +20 at Arizona State, over/under: 52.5. The Sun Devils won last year’s Territorial Cup 70-7, and the gap between the two teams has only widened since then. Arizona State has underperformed this regular season but can go out on a high against the rival. Play: Arizona State -20.

Pittsburgh -12 at Syracuse, over/under: 57.5. Syracuse’s defense has regressed in a big way the last two weeks, which is a big problem against a Pittsburgh offense rated eighth in the nation by the SP+ ratings. The Panthers haven’t failed to cover a road game all season. Play: Pittsburgh -12.

Take a Lap: Michael or Mike? Nuga makes the call