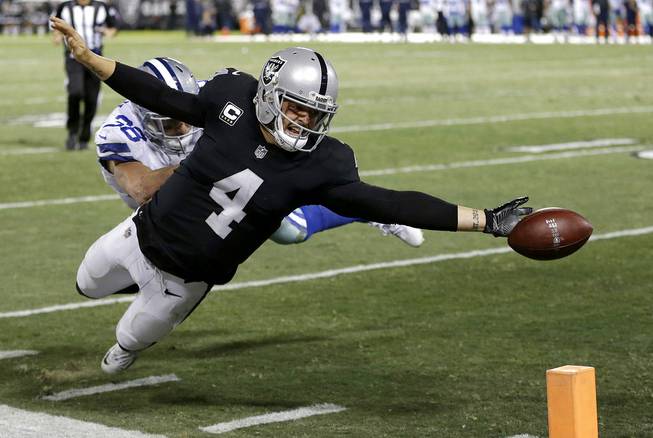 Raiders’ offense running out of time to turn season around

Oakland Raiders quarterback Derek Carr (4) fumbles the ball into the end zone in front of Dallas Cowboys strong safety Jeff Heath (38) during the second half of an NFL football game in Oakland, Calif., Sunday, Dec. 17, 2017. The play was ruled a touchback, and the Cowboys got possession. The Cowboys won, 20-17.

Even when the Raiders struggled the past two years with midseason swoons like their current three-game losing streak, the offense stayed mostly dependable. The organization spent most of its resources this offseason on overhauling the defense under the assumption that the offense could maintain its high level of play. It hasn’t worked out that way. Turnovers plagued the offense in a 23-16 Week 9 loss to the New York Giants, lethargic play struck in a 41-14 Week 10 loss to the Kansas City Chiefs, and a combination of both prevailed in last week’s 32-13 defeat to the Cincinnati Bengals. It’s gotten to the point where a vocal portion of fans have called for Marcus Mariota to replace quarterback Derek Carr, who’s accounted for six turnovers to only four touchdowns during the losing streak. The switch is not going to happen, at least not yet, as the coaching staff trusts Carr. But he’s running out of time to salvage a once-promising season with Las Vegas slipping down the standings.

This is speculative, as the Las Vegas running game hasn’t looked potent nearly all year and sits 28th in the NFL at 3.7 yards per attempt. But if there was ever an opportunity for a turnaround, it should be this week. Dallas has emerged as a surprise Super Bowl contender by being solid to outstanding in every major area except one — rush defense. The Cowboys have lost two of three games, to the Chiefs and Denver Broncos, while getting gashed for just short of 5 yards per attempt on the ground. If the likes of Denver rookie Javonte Williams and Kansas City’s just-returned-from-injury Clyde Edwards-Helaire can run effectively on Dallas, Las Vegas’ duo of Josh Jacobs and Kenyan Drake should be able to do the same — especially on the edges. The Raiders’ interior offensive line has failed to consistently get an adequate push, but right tackle Brandon Parker had his strongest game against the Bengals and left tackle Kolton Miller has been among the team’s best players.

“My whole mom’s side of the family is Cowboys’ fans. My middle name is Dallas because of that. I grew up, my papa would preach, we’d go to his house and we wouldn’t eat at a table; we’d eat with TV trays watching the Cowboys play.” -Carr on his family Thanksgiving tradition as a child

“We’ve been fighting. Fighting comes from the soul and it’s the heart of a man. I don’t see those issues on tape. I feel like we’ve done a good job battling.”-Bisaccia on why he’s confident the Raiders can turn it around

“The first play of the game, someone had taken Josh’s helmet and accidentally put it on their head without realizing it, so we didn’t have Josh on the first run of the game.” -Olson on why Jacobs didn’t start against the Bengals, and perhaps part of the reason why they couldn’t score despite starting their first drive at the 9-yard line

Dallas linebacker Micah Parsons is a runaway favorite for Defensive Rookie of the Year honors while teammate Trevon Diggs at cornerback is currently the second choice for the Defensive Player of the Year award. Neither Parsons nor Diggs is perfect — they both tend to be overly aggressive at times — but there’s no denying they’re highly athletic, big-time playmakers. Diggs has a league-leading eight interceptions on the season, including two returned for touchdowns, while Parsons has eight sacks and 13 tackles for loss. They’ve consistently produced the type of quick-strike, game-altering moments that the Raiders’ offense has lacked since coming back from their bye week. Diggs will be ready to feast if Carr’s accuracy woes persist. Parsons could eat up Alex Leatherwood and Jordan Simmons, the worst pair of starting guards in the league by Pro Football Focus’ grading system. Interim coach Rich Bisaccia and offensive coordinator Greg Olson must have specific plans in place for dealing with both defenders — they’ve been that impactful.

One of the most underrated players on the Raiders’ roster has seen his responsibilities increase over the past month to become the ultimate utility man. He played a key role with a career-high 66 offensive snaps and a touchdown in the Raiders’ last win, a 33-22 victory over the Philadelpha Eagles in Week 7, with Pro Bowler Darren Waller out with an ankle injury. Waller has since returned, but the Raiders have occasionally split him out wide with Moreau at the traditional tight end spot. Meanwhile, fullback Alec Ingold was lost for the season with an ACL tear against the Chiefs and Moreau has assumed some of his duties. He’s now filling in for Ingold as the special teams captain and even at fullback on a few snaps. Moreau scored the Raiders’ only touchdown against the Bengals, on a 19-yard pass from Derek Carr, to continue a season-long trend where he’s been a red-zone option.

Number of years since the Raiders won a Thanksgiving game, as the franchise’s last victory in the traditional holiday spot came in 1968 when they beat the Bills 13-10 despite getting no offensive points. Franchise legends George Blanda, who had two field goals, and George Atkinson, who returned an interception for a touchdown, led the Raiders to victory. The Raiders have played on Thanksgiving three times since the win, including the last two against the Cowboys. Dallas won 24-7 in a 2009 Thanksgiving meeting and 31-24 in 2013. No players on either side remain from the 2013 game as Carr, the longest-tenured Raider, debuted the next season. Dallas plays on Thanksgiving every year, but this is a special occasion for Las Vegas and the players have expressed excitement about the opportunity. A stage like this, which will likely come with the Raiders’ biggest television audience of the season, would be quite the place for the team to get back on track.

Raiders defensive coordinator Gus Bradley said, contrary to what might be popular belief, he thought the Cowboys would go run-heavy on Thursday. It makes sense considering Dallas is beaten-up at receiver and already ranks in the league’s top half with runs on 42% of plays. The Cowboys will also be healthier on the offensive line this week with tackle Tyron Smith expected to return from injury. Bisaccia, who coached in Dallas from 2013-2017, called Smith and linemate Zack Martin “gold-jacket type players” to indicate he believes the veterans merit Hall of Fame consideration. They should be able to create large enough holes for Elliott to at least reach his season average of 69.5 rushing yards per game even though he’s dealing with a minor knee injury.