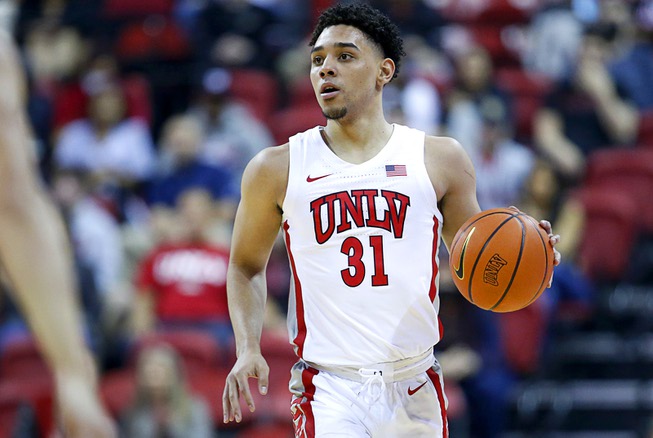 UNLV paid Whittier $7,500 to come to Las Vegas on Wednesday for a Thanksgiving Eve matchup at the Thomas & Mack Center.

Did the scarlet and gray get their money’s worth?

The scoreboard says yes, as UNLV rolled to a predictably easy 101-45 win over their Division-III opponent. But that’s not what the game was really about. With No. 2 UCLA coming to town on Saturday, the priority for Kevin Kruger had to be on preparing not for the Poets, but for the baby-blue program with 11 national championships.

The players clearly had UCLA on their minds. How much was it weighing on Wednesday’s proceedings? When the first question at the post-game press conference asked what his team accomplished against Whittier, it took senior guard Marvin Coleman only seven seconds to mention UCLA.

As tune-ups go, it wasn’t perfect. Kevin Kruger was unhappy with the play of his starting lineup to open the game, so four minutes in he benched all five and replaced them with an all-reserve group.

And when the starters lagged again to begin the second half, Kruger again sat all five in favor of a bench unit.

The wholesale changes seemed to rev UNLV’s engine, with the bench combining to score 61 of UNLV’s 101 points.

The coach stopped short of calling it a punitive measure, but again, in the context of preparing for UCLA it wasn’t an ideal showing for the starters.

“I wouldn’t say it was a message,” Kruger said, “but they’ve got to know their approach wasn’t what we were looking for…We’re still going to start the same five on Saturday vs. UCLA, but I’d be lying if I didn’t say I kind of wish they’d had a little more oomph, a little more tenacity out there, because that second group went out there and changed everything.”

The good news is that the extended run gave some of the reserves an opportunity to get into rhythm. Junior guard Justin Webster was the biggest beneficiary, as he connected on 7-of-10 shots and tallied a season-high 17 points in 23 minutes. He also posted eight rebounds and five assists.

Webster came into the night averaging 0.6 points on 9.1% shooting, so target practice against Whittier was exactly he and the rest of the bench needed to get primed for UCLA.

“To have those guys go out there tonight and see some shots go in, hopefully it will kind of give them that little burst to go out there Saturday and have confidence,” Kruger said.

Coleman, who struggled with turnovers in limited action against Michigan and Wichita State, finished with 13 points, nine rebounds, four assists and just one giveaway.

UNLV is now 4-2 on the season. They’ll practice on Thanksgiving morning and again on Friday, then it’s time for the biggest game of the non-conference season.

“It starts right now with the rest we get, what we eat, the film,” Coleman said. “We just watched them play Gonzaga. That was a tough game [for UCLA]. So it starts right now. We’ve got to prepare for tomorrow, get good reps in for practice these next couple days and prepare as much as we can.”