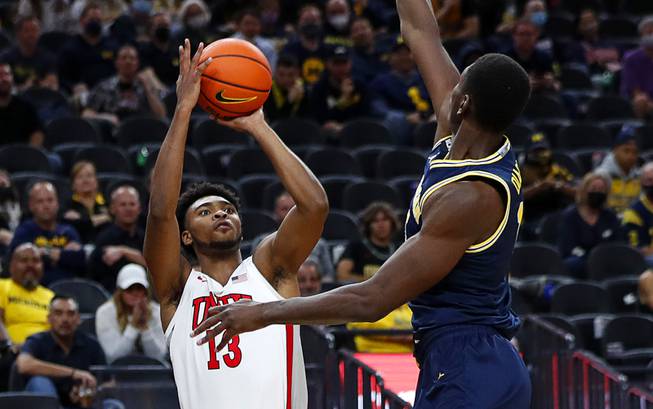 UNLV is hosting the No. 2 team in the country on Saturday (2 p.m., Stadium), and it seems like the buzz leading up to the game has been…underwhelming.

Whether it’s a sudden influx of major league sports drawing the interest of Las Vegans away from UNLV basketball or simply a case of fan attrition due to a decade of subpar results, it feels like people aren’t as fired up for the UCLA showdown as the should be.

If you’re one of those people looking for a reason to get excited, here are five storylines that make this a true marquee matchup:

No offense to quality Mountain West teams like Colorado State and San Diego State, but this is the marquee game on UNLV’s schedule this year.

It’s UCLA. It’s a reigning Final Four team. For UNLV, it’s a true home game. Everything is lining up to make this a memorable clash, and first-year head coach Kevin Kruger understands the magnitude of this matchup.

Kruger said this current iteration of the UCLA program under Mick Cronin is what UNLV aspires to be.

“They’re a national title contender,” Kruger said. “I think they’ve shown they’re one of the best teams in the country. Coach Cronin, as long as I can remember, has always had an unbelievable reputation for being tough. His guys play tough. They play hard.”

UNLV isn’t treating this like any other game on the schedule, as Kruger had them practicing through Thanksgiving in preparation. Look for the scarlet and gray to play their best game on Saturday.

If you’re the kind of basketball fan who loves individual shootouts, this game will feature a couple premier gunslingers in UCLA wing Johnny Juzang and UNLV star Bryce Hamilton.

Both players declared for the NBA Draft after last season only to return to college, and they are the unquestioned No. 1 options for their respective teams. Juzang, who lit it up in the NCAA Tournament last year, is scoring 18.3 points per game, while Hamilton is putting up 18.0 per game (against Division I competition).

To make this matchup even more personal, Hamilton and Juzang came up as high-school rivals in Southern California. In 2017, Juzang led Harvard-Westlake past Hamilton’s Pasadena squad in the CIF Sectional Semifinals, but a few weeks later Hamilton dropped 31 points to win a rematch in the state tournament.

If this game is close in the second half, don’t be surprised if the Thomas & Mack Center turns into a wild west shootout between these two old SoCal rivals.

Win over the fans

Attendance at the Mack this season has been, in a word, dreadful. Some of that is out of the program’s hands—the world is still in a pandemic, after all—but a good portion of the fan base is taking a decided “wait and see” attitude when it comes to this team.

Well, this is the perfect opportunity for UNLV to show them that this team is different. This game will probably produce the highest attendance at the Mack all season, and a strong showing from the scarlet and gray would go a long way toward convincing the interested but skeptical partisans that this squad is worth rooting for.

Kruger believes the fans would love the 2021-22 team if they only gave it a chance.

“Really hoping the city comes out and supports the guys,” Kruger said. “This is a group that’s easy to root for. They play hard. They’re happy for each other. I think they’re representing UNLV the way that UNLV fans and alums want to be represented, so it would be awesome to see a bunch of people out there in Rebel red on Saturday cheering for them.”

An upset win on Saturday would ensure more fans start coming out to support the scarlet and gray on a regular basis.

Fearless Freddie to the rafters

If the on-court action isn’t enough to get you hyped for this game, maybe a halftime jersey retirement ceremony for one of the program’s all-time greats will get your heart pumping.

Freddie Banks will have his No. 13 raised to the rafters on Saturday in a move that some program supporters believe is long overdue. Banks, a Las Vegas native, is among the program’s top five all-time leading scorers and still holds the school record for 3-pointers in a single season.

Kruger expects it to be an electric moment.

“We’ve got one of the best players in UNLV history getting his jersey retired, so that’s special,” Kruger said. “There will be a lot of emotion in the arena.”

UCLA and UNLV may not be competing directly for recruits so much these days, with Kruger’s staff seemingly more focused on Big 12 country, but these are still two programs with something of an overlapping geographic footprint. In college sports, that means something.

And last time these teams met, it was in Los Angeles two years ago and the Bruins dismantled that T.J. Otzelberger-led UNLV squad, 71-54.

Marvin Coleman is one of only two players who remain from that loss, and he hasn’t forgotten. The senior guard brought it up unsolicited during his post-game comments following the Whittier game and seems to believe a change in venue could bring a change in outcome.

“That’s a great rivalry from the past,” Coleman said. “Obviously being at the Thomas & Mack, that’s huge. Hometown advantage.”

A running UNLV vs. UCLA rivalry could be something of a sleeping giant on the west coast, but both teams have to hold up their end of the bargain. Right now UCLA is hot and UNLV is not, but Kruger is working to change that—and it could begin on Saturday.