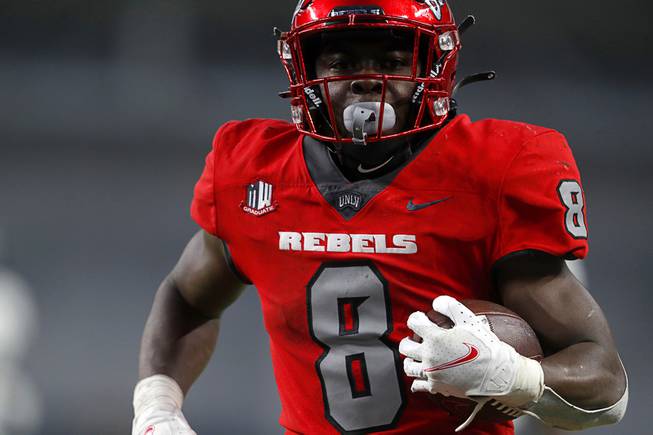 UNLV Rebels running back Charles Williams (8) scores a touchdown during the second half of a NCAA football game at Allegiant Stadium Saturday, Nov. 13, 2021.

It’s been a long season for UNLV football—a long two seasons, actually—so the team’s focus this week has been on ending things on a high note and carrying some momentum into the offseason.

A win would certainly give the program a jump start on 2022 as it would cement a 3-1 finish over the final month of an otherwise hapless campaign, but a difficult road tilt at Air Force is standing in the way (12:30 p.m., Stadium).

A look at three keys for UNLV heading into the season finale:

Give-up potential against the option

It seems like we’ve been waiting for UNLV to give up all season, and aside from one blip at UNR a month ago in which the team clearly did not want to be there, this is a group of players that has fought hard every week.

Can they keep it up for sixty more minutes?

It’s going to be a challenge. Air Force runs a relentless, demoralizing option-rushing offense that can grind down any team and make them want to quit—the Falcons are No. 1 in the nation in rushing yards per game (321.7) and No. 2 in run ratio (85.9% of plays)—so 1-10 UNLV is certainly going to have its will tested as Air Force pounds the rock over and over again.

Senior tight end Gio Fauolo is a great example of not giving up, as he battled back from a potentially season-ending knee injury and will play his final college game on Friday.

Fauolo thinks his team will compete to the end, despite their record.

“Obviously our goals at the beginning of the season aren’t attainable anymore, but to win every [individual] game is still attainable,” Fauolo said. “So whether you’re 10-1 at this point or 1-11, 2-9, at the end of the day it’s still football and you’re trying to win every game.”

Of course that’s easy for him to say, as Fauolo is an offensive player and won’t have to line up against the option on every snap.

Who is going to be UNLV’s quarterback in 2022? That’s the biggest question going into the offseason, as this looks like a program that might be a stable, quality passer away from respectability.

Will this final game provide any clarity on the position?

Redshirt freshman Doug Brumfield is out due to injury. True freshman Cameron Friel could cement himself in the pole position with another strong performance in the finale, but he is questionable after getting knocked out of last week’s loss to San Diego State. Junior Justin Rogers relieved Friel and went nuts, completing 15-of-21 passes for 305 yards with two touchdowns and one interception, but after a season of lackluster play can Rogers follow up with another good outing?

Of course, there’s a possibility that next year’s No. 1 quarterback isn’t on the roster right now, but for the passers hoping to get a jump on the offseason depth chart, today is the last chance to show their stuff.

Charles Williams has accomplished a lot during his six years at UNLV. He is the program’s all-time leading rusher, he’s a former All-Mountain West first team selection and he has won the Fremont Cannon twice, including 2019 when he ran for 138 yards and a touchdown at Reno.

And now he’s suiting up in the scarlet and gray for the final time.

It’s been a productive farewell tour. Williams has already set a career high in touchdowns (13) and he’s just 139 yards away from breaking his previous single-season rushing high from 2019 (1,257 yards).

Air Force isn’t going to throw him a parade, though. The Falcons boast one of the stingiest run defenses in the nation, ranking 13th in yards per attempt allowed (3.3) and seventh in yards per game allowed (101.6), so if Williams wants to go out on a high note he’s going to have to earn it.