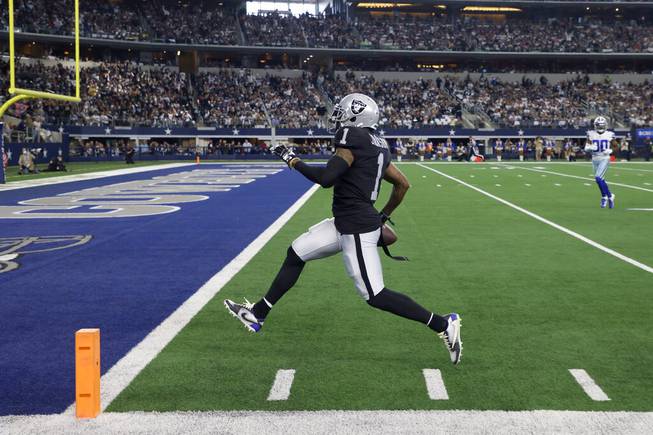 The only audible noise in the visitor’s news conference room at AT&T Stadium were the celebratory shouts, claps and chatter coming from the nearby locker room for several minutes after the Raiders’ 36-33 victory over the Cowboys.

A longer-than-usual amount of time elapsed before the Raiders appeared for their postgame obligations, and the slight delay was no coincidence.

“I was trying to get around to every player in the locker room,” interim coach Rich Bisaccia said.

Las Vegas’ overtime upset of Dallas on Thanksgiving was that type of victory — essential, reaffirming and, just maybe, season-saving. The Raiders snapped a three-game losing streak on Thanksgiving, shooting back up to 6-5 on the season and in the conversation for an AFC playoff spot.

“You don’t want to say must-win but we felt it a little bit,” receiver Hunter Renfrow said. “5-6 is a whole lot worse than 6-5, and to beat a good Cowboys’ team on Thanksgiving in primetime, it gives us a lot of confidence going forward.”

Raiders’ fans carried a lot of frustration from the recent losses and shared some specific gripes more often than others. Among the top things they most vocally wanted to see fixed against the Cowboys were fixing the run game, cutting down on turnovers and featuring under-utilized players like DeSean Jackson and Marcus Mariota.

Las Vegas did all of those.

Running back Josh Jacobs ran a season-high 22 times for 87 yards. Quarterback Derek Carr halted a three-game turnover streak, and the rest of the team followed. Jackson and Mariota each found the end zone, with the former scoring on a 56-yard play in the opening five minutes that the Raiders schemed specifically for the Cowboys during their short week of preparation.

“I (told Desean), ‘If we get a certain look, I want you to run around that safety and want you to go across the field and I’m going to throw it to you,’” Carr recalled. “He did it exactly how I asked him, and I tried to throw it as hard as I could, and he made an outstanding catch and broke a tackle for a touchdown.”

Carr finished with 373 passing yards while completing 24 of 39 attempts to break the Las Vegas offense out of its malaise, but that wasn’t the best part of the victory to Bisaccia. Instead, it was the way the Raiders displayed the “complementary football” he preaches.

The defense didn’t have its best day but made Dallas one-dimensional by holding explosive running back duo Ezekiel Elliott and Tony Pollard to 61 yards on 19 carries. It also came up with timely stops including a pair by surging edge-rusher Yannick Ngakoue.

The defensive captain got the team’s lone sack on a third-down play in the fourth quarter to force the Cowboys to punt. He then pressured Dallas quarterback Dak Prescott — who matched Carr overall in totaling 375 yards on 32-for-47 passing — in the final seconds to help keep the Cowboys out of the end zone and force them into a game-tying field goal.

Dallas kicker Greg Zuerlein easily chipped in that 45-yarder, but he had missed both an extra point and a 59-yarder earlier in the game. Las Vegas kicker Daniel Carlson proved more dependable, making all five of his field goal attempts including a 56-yarder inside of two minutes remaining and then a 29-yard game-winner.

Not bad for someone who missed a day of practice this week with food poisoning.

“I told them I’ll find a way to play if I need to — find some adult diapers or whatever, trash bag on the sideline,” Carlson joked.

That wasn’t ultimately necessary but spoke to the type of buy-in the Raiders needed to knock off what had been one of the NFL’s best teams this year while they were mired in their own skid. Carlson’s bug didn’t turn out to be their biggest bout of adversity — an injury to star tight end Darren Waller did.

Waller was the lone bright spot of the Raiders’ offense in a loss to the Bengals last week, but he caught only two passes for 33 yards before leaving the game with a knee injury in the second quarter. Without him, a somewhat embattled receiver’s group had to step up.

Renfrow went for a career-high 134 yards on eight carries, including a 54-yarder in the fourth quarter that Carr joked proved the short-yarder receiver was “a deep threat.”

“I told him, ‘A real deep threat probably would have scored,’” Renfrow said.

Jackson was right behind Renfrow in the box score, accounting for 102 yards and three receptions. Zay Jones also finally looked settled into the No. 1 receiver role he was thrust into out of the bye week, catching five passes for 59 yards.

“Even when Waller is getting all the credit — and rightfully so, he’s one of the best players — but the way they keep their head down and just stay at it, that’s why they have days like today,” Carr said of his receivers.

Some of their biggest plays, however, had nothing to do with catches as the Raiders regularly marched down the field via pass-interference calls. While most of the key penalty flags had gone against Las Vegas during its downturn, the pattern flipped against the Cowboys.

The game-winning field goal was set up only after a pass interference against Jones on Anthony Brown wiped out what appeared to be a Cowboys’ third-down stop. Brown was also flagged for contact on Jackson in the end zone in the second quarter, leading to a one-yard touchdown run by Jacobs.

Even Mariota’s three-yard score on an option play came after Cowboys rookie linebacker Micah Parsons picked up a controversial roughing the passer flag on Carr. In total, the Cowboys committed 14 penalties for 166 yards.

The Raiders also had 14 penalties, but for only 110 yards and not in as pivotal of situations. The discrepancy left Cowboys owner Jerry Jones miffed after the game.

The Raiders weren’t about to apologize. They were desperate for a victory and would have taken it any way possible, but that’s not to say they didn’t think the flags were justified.

“The penalties obviously help, and they are legitimate things that happened,” Carr said. “We kept saying, ‘They’re holding us, and we believe if they aren’t holding us, we’re going to hit those plays.’ So, I thought that for our whole team, everything that’s gone on, for us to be able to bounce back, it says a lot about the football character, the character of the men.”

It had been more than a month since the Raiders last won, and they arguably hadn’t played as complete of a game with so many different contributors all season. Complementary football exemplified.

They earned the celebration at AT&T Stadium.

“For us to be able to battle through that, our backs were against the wall,” he said. “There’s no doubt about that. That’s just a fact, everyone can see that and the way that we fought today and for as long as it took to win…I’m very proud of our team.”