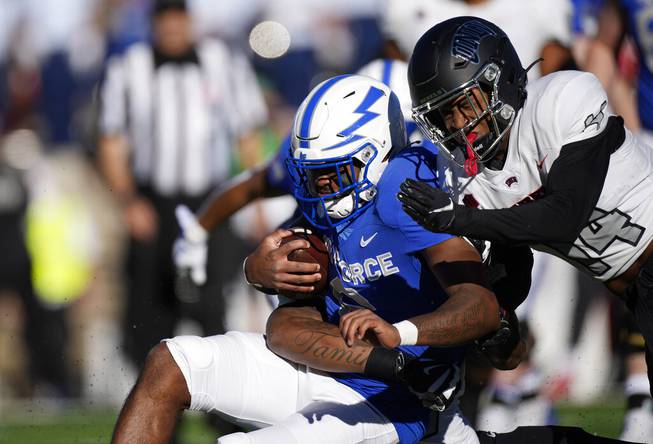 Air Force quarterback Warren Bryan, left, is tackled after a short gain by UNLV defensive back Tyson Player in the first half of an NCAA college football game Friday, Nov. 26, 2021, at Air Force Academy, Colo.

UNLV’s season-ending road trip to Air Force turned out to be a microcosm of the 2021 season.

The scarlet and gray were down to their third-string quarterback, which was a theme of the entire campaign. They were banged up elsewhere, missing key players on both sides of the ball. And they were sloppy, committing two first-half turnovers (three if you count a botched field-goal attempt).

All of that was very familiar to fans who have followed this team all season.

What wasn’t so familiar was the way UNLV got blown out and put up no resistance from the opening kick.

In a season that grew to be defined by close, heartbreaking losses for UNLV, this one was never in question as Air Force handed Marcus Arroyo’s squad the beatdown of all beatdowns, 48-14. And it was not as competitive as the final score would indicate.

UNLV finishes the season with a 2-10 record and a 2-6 mark in the Mountain West.

Arroyo was just as surprised as anyone to see his team come out and lay down in their final game of the year.

“Overall I’ve been completely excited and optimistic about the improvements we’ve made all season—our identity, our effort, our commitment, to each other, our toughness,” Arroyo said. “Tonight wasn’t that night.”

Losing this game was not a shocker; Air Force is one of the best teams in the conference (9-3, 6-2 MWC) and came into Friday as an 18-point favorite. But to see the scarlet and gray go down without a fight, that was entirely out of character.

This is the same team that suffered five straight losses in September and October—four of them by a single score, in gut-wrenching fashion—and persevered to beat New Mexico and Hawaii the next two weeks.

So where was that competitive spirit on Friday? What happened in Colorado Springs to make them turn in early and head for the exit?

Air Force had a lot to do with it. The Falcons’ dominant ground game is a pain to defend, and they certainly poured it on, averaging 7.4 yards per carry. Their option attack was so ruthlessly effective, they didn’t deign to attempt a single pass all day: 69 offensive snaps, 69 rushing attempts for 511 yards.

But if UNLV had any desire to be on the field, it didn’t show in their play.

It started with UNLV receiving the opening kickoff and fumbling on the return. Air Force recovered at the 15-yard line and scored a rushing touchdown three plays later. UNLV’s next drive ended with a lost fumble by quarterback Justin Rogers, and Air Force scored nine plays later. UNLV’s third possession ended when a high snap on a field-goal attempt forced a turnover on downs.

Arroyo said it went haywire from the first play and got worse from there.

“I think fumbling the opening snap, not executing in the first quarter, not being able to protect each other, dropping balls, lack of execution vs. a quality opponent, especially late in the season is always tough.”

Because the UNLV defense was unable to put up any resistance against the Air Force option attack, the Falcons built an astronomical time-of-possession advantage of 40:49 to 19:11.

Junior linebacker Jacoby Windmon said his unit didn’t do enough to battle through the early miscues.

“It started off with the opening kickoff,” Windmon said. “Not to point fingers at anybody, but that was a big drive killer for us. And they scored off that possession. We’ve just got to continue to fight.”

The one silver lining for UNLV was the farewell performance of senior Charles Williams. The sixth-year running back went out with a decided bang, rushing for 137 yards (including a 72-yard burst in the fourth quarter) and two touchdowns on 16 carries.

Williams finishes his final season with 1,256 yards (one yard shy of his career high set in 2019) and 15 touchdowns.

After spending more than a half-decade at UNLV, Williams struggled to process his feelings just minutes after the clock wound down on his college career.

“It’s all over the place right now,” Williams said. “I can’t tell you the exact emotion. Frustrated, probably. That’s about it.”