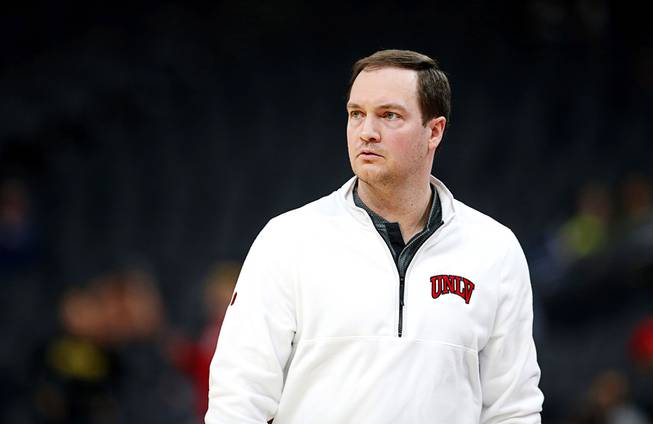 With 14:43 remaining in the second half of Saturday’s matinee against UCLA, guard Josh Baker worked his way into the lane and made a corkscrew push shot to pull UNLV within 46-37. At that point, the crowd was into the game and the scarlet and gray had seized momentum.

Six minutes later, UNLV hadn’t scored again. During that stretch the home team combined to miss all seven of its shots, going 0-of-6 from 3-point range.

Head coach Kevin Kruger subbed in reserve guard Marvin Coleman, and the senior promptly missed an open 3 from the left wing. By the time UNLV scored again, UCLA had increased its lead to 21 points and the contest was over.

Now, while Coleman brings a lot of valuable traits to this UNLV squad, he is decidedly not a microwave-type bench scorer. But with literally nothing else working on the offensive end—UNLV connected on just 30.4 percent from the field on the afternoon—Coleman’s heat-check fling was as good a shot as any other UNLV was going to get.

That’s a problem Kruger knows this team has to solve if they intend on beating a quality opponent this year.

In 40 minutes against UCLA, they couldn’t crack the code.

“I think we started to press a little bit,” Kruger said. “Right out of the half, cutting it to nine at that first media timeout, we had done what we needed to do. We just couldn’t sustain it.”

UCLA smothered UNLV’s preferred offensive sets, effectively keeping senior guard Bryce Hamilton out of the paint and forcing the scarlet and gray to attempt tough 2-point shots. UNLV hit just 3-of-15 from the mid-range; Donovan Williams went 1-of-5 on 2-point jumpers while Hamilton himself went 0-of-4.

It was a defensive clinic from UCLA and coach Mick Cronin.

“They played their style of defense,” Williams said. “They stayed in front, they stayed in gaps. I think for us the challenge is just trying to create better shots than we got tonight.”

UNLV is now 4-3 on the season and will travel for its first true road games of the season next week, when they play at SMU on Wednesday and at San Francisco on Dec. 4.