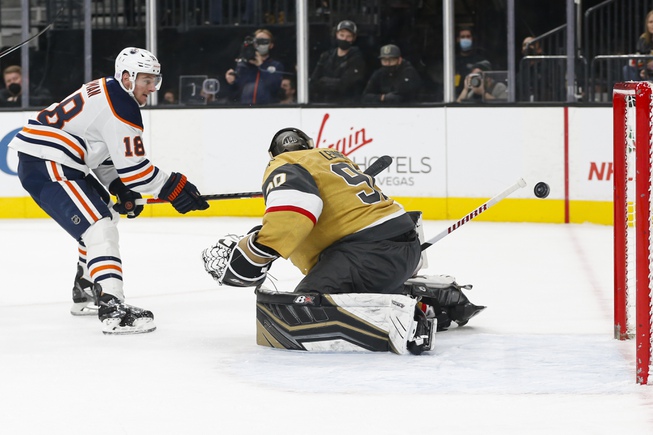 Tell any team facing the Edmonton Oilers that they’ll hold Connor McDavid and Leon Draisaitl without a point and they won’t allow a power-play goal or even a goal off set plays in the zone, and they’ll take those odds.

That’s what makes Saturday’s 3-2 loss so frustrating for the Golden Knights.

They did so much right against the top-ranked team in the Pacific Division, yet gave up too many odd-man rushes to Edmonton’s secondary scorers and paid the price in the second home loss to the Oilers this season.

“They’re an opportunistic team, one that you can’t give too many chances to,” forward Chandler Stephenson said. “We kind of shot ourselves in the foot with that, and we just need to be better.”

The Golden Knights owned the first half of the opening period, and only a couple spectacular saves from Edmonton goalie Mikko Koskinen kept Vegas from drawing first blood.

The Oilers started to counter near the 13-minute mark, erasing the shot advantage Vegas built up, and eventually cashing in on two key Golden Knights mistakes: Max Pacioretty’s cross-ice pass was intercepted with 2:10 left in the first, then the Oilers fought Mark Stone off the puck in the offensive end in the final seconds.

In both instances, a Vegas defenseman was down low in the zone, leaving just one back to defend the ensuing Edmonton rush.

Brayden McNabb was left out to dry on Ryan Nugent-Hopkins’ 2-on-1 finish, then neither Stone nor Pietrangelo could catch up to Zach Hyman’s breakaway. Just like that the first period ended with Vegas in a 2-0 hole.

“There was 10 minutes of really poor hockey that really bit us hard,” coach Pete DeBoer said.

The second period was much of the same.

Goalie Robin Lehner had to defend far too many rush chances and couldn’t bat them all away, including Jesse Puljujarvi’s breakaway five-hole tally 6:39 into the period to make it 3-0.

The Golden Knights battled back after that, including a breakaway goal of their own from Stephenson, his eighth of the season and team-leading 20th point soon after Puljujarvi’s goal. Jonathan Marchessault’s shot deflected off Reilly Smith for the other goal in the third period, and despite a 12-5 edge in shots in the final 20 minutes, Vegas couldn’t even it.

“We did probably 80 to 85% of the things we wanted to do tonight,” DeBoer said. “But in this league, against a first-place team that’s not enough.”

The final numbers do look good for the Golden Knights, an encouraging sign for a team that was getting manhandled in its own end early in the year. They handled Edmonton well in the defensive zone, and finished with a 69-50 edge in shot attempts (38-30 on goal).

Over their first 17 games, the Golden Knights allowed 2.99 expected goals for every 60 minutes they spent at 5-on-5, according to data from natural Stat Trick, by far the worst total in the league. In their last four, they’ve trimmed nearly a full goal off that total to 2.03. On Saturday it was 1.86.

The Golden Knights are limiting chances better than they were earlier this year, as well as start to regain the possession advantage they’re known for. Even in a loss, there’s reasons to feel like their game is getting back on track.

“I thought we did a lot of good things tonight,” Smith said. “Puck possession time in the O-zone I thought was a lot better. I think we just turned a couple pucks over and they’re quick to transition and they got, I don’t know, four or five breakaways tonight and we’ve got to limit that.”

And besides, they held arguably the two best players in the league off the scoresheet Saturday. McNabb was brilliant in defense of McDavid. When the two were on the ice together, which was about 70% of McDavid’s 5-on-5 time, the Golden Knights out-attempted the Oilers 18-8 and Edmonton mustered just 12% of the expected goals.

Alex Pietrangelo was equally effective against Draisaitl. Both only had one shot attempt apiece while on the power play, too. It was just the sixth time in 61 career games that Edmonton won when both McDavid and Draisaitl were held without a point.

So yes, there were certainly things to fix for the Golden Knights. Over-aggressive defensive pinches or sloppy plays in the middle of the ice led directly to Edmonton zooming down the ice and scoring three times.

They dropped a winnable game on Saturday, and that hurt. But the Golden Knights, starting to get healthy and controlling play again, are ever-so-surely starting to look like themselves.

“I loved a lot of parts of our game today,” Lehner said. “If we can clean those up, I feel like we can go on a run. But that needs to be fixed fast.”