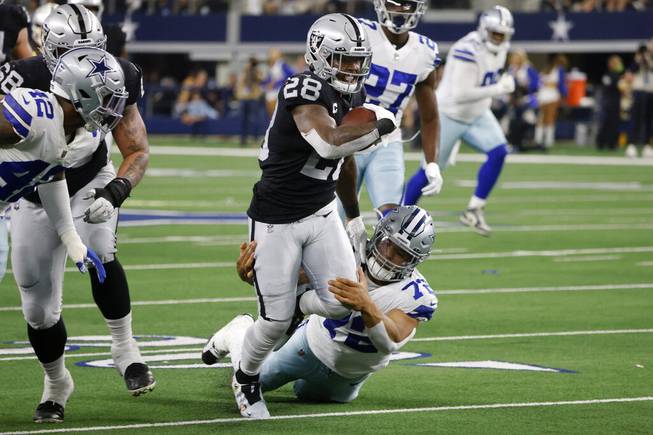 Las Vegas Raiders running back Josh Jacobs (28) picks up a first down running the ball as Dallas Cowboys defensive tackle Trysten Hill (72) helps make the stop in the first half of an NFL football game in Arlington, Texas, Thursday, Nov. 25, 2021.

Hill, who was sidelined the first eight games of the season while recovering from a torn knee ligament last year, will miss Thursday night’s game at New Orleans and the Dec. 12 game at Washington. He can return Dec. 19 at the New York Giants, the last of three consecutive road games.

NFL vice president of football operations Jon Runyan said in a letter to the Hill that the third-year player spent nearly a minute at midfield after the game looking for Simpson and walked the opposite direction from the Dallas locker room to confront the Raiders’ left guard.

“You both engaged in a verbal chest-to-chest confrontation which you escalated by throwing an open hand punch to his facemask, forcible enough to cause your opponent’s helmet to come off,” Runyan wrote.

The league said the suspension was for violations of rules regarding unnecessary roughness and unsportsmanlike conduct, particularly for contact to a players’ face, head or neck. Hill can appeal the suspension.

Hill had just played his best game of the season, leading Dallas defensive linemen with five tackles against the Raiders. Dallas’ top pick as a second-rounder in 2019, Hill’s tenure has been mostly disappointing. He has played just 15 games in his three seasons.