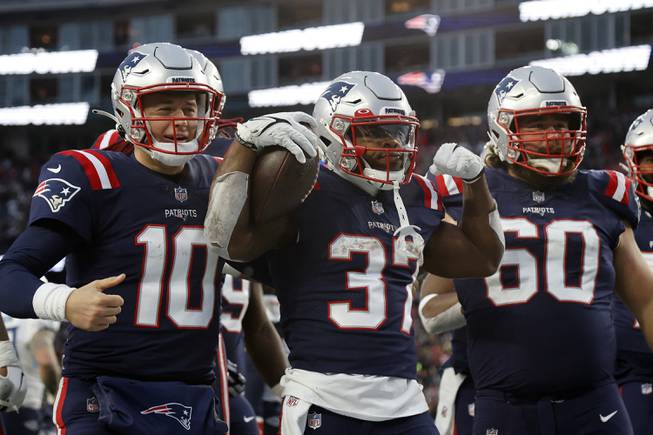 New England Patriots running back Damien Harris (37) celebrates after scoring a touchdown with teammates Mac Jones (10) and David Andrews (60) during the second half of an NFL football game against the Tennessee Titans, Sunday, Nov. 28, 2021, in Foxborough, Mass.

That changes this week. This season’s first meeting between the AFC East rival New England Patriots and Buffalo Bills stands as one of the biggest games of the year.

The teams are currently tied as the +400 (risking $1 to win $4) second choice to win the AFC at the Westgate Las Vegas SuperBook. They’re also two of the six teams offered at less than 10-to-1 to win the Super Bowl, at 8-to-1 apiece.

The showdown will have the biggest single-game effect on the race for the AFC’s No. 1 overall seed so far this season. The betting market is pricing the two teams as evenly matched with the home-team Bills currently favored by 2.5 points.

Patriots at Bills will end Week 13 in fashion, likely with one of the highest betting handles of the regular season, but all the games pay the same. There’s a lot more to handicap, so as usual, let’s break down all of them.

Read below for picks on every Week 13 game. Picks are separated into three confidence categories and listed in rough order of confidence. Lines are the best currently available in Las Vegas on the chosen side. The record for the year picking every game against the spread stands at 82-82-1 after an 8-7 record in Week 12.

Las Vegas Raiders -2.5 vs. Washington Football Team It couldn’t possibly be a better situational spot for the Raiders, which had extra time to rest after playing on Thanksgiving going up against a team traveling 2,500 miles west on a short week following “Monday Night Football.” Washington’s -53 point differential on the year is also an indicator it’s not as strong as its 5-6 record suggests.

Indianapolis Colts -8.5 at Houston Texans Despite a 38-31 loss, and unlucky against-the-spread loss as a 3-point underdog, to Tampa Bay last week, Indianapolis more than proved its ascent is real by outgaining the defending champions both overall and on a per-play basis. The Colts should be laying double digits to the lowly Texans.

Denver Broncos +10 at Kansas City Chiefs Denver’s point differential of +32 is a point better than Kansas City’s +31 on the season. That’s not to suggest Denver is a better team — it’s gone against a much-weaker schedule — but the gap is not as wide as this line suggests.

Minnesota Vikings -7 at Detroit Lions In the two previous games where he started for the injured Dalvin Cook, Minnesota running back Alexander Mattison ran for 225 yards and just less than 4.5 yards per carry. He’s proven capable of filling in for the Pro Bowler, meaning Cook’s absence with a shoulder injury shouldn’t have trimmed a half-point off this spread from last week’s lookahead line.

New Orleans Saints +5 vs. Dallas Cowboys The Saints’ defense could have made an argument it was the best in the NFL before a slide over the last month, particularly in two straight losses. This is a leap of faith that the unit can regain some form against a Dallas offense that remains severely beaten-up and a coaching staff cut down by positive coronavirus tests.

Philadelphia Eagles -6.5 at New York Jets The Jets rate 30th in the NFL in stopping the rush by DVOA. That’s going to be a problem against a clicking Eagles’ run game that rates second in the NFL in gaining 5.1 yards per carry.

Buffalo Bills -2.5 vs. New England Patriots This comes down to whether a bettor weighs recent performance or the overall season more strongly. New England, with a six-game covering streak, has been the best team in the league over the last month but Buffalo’s season-long, league-leading +1.3 net yards per play is hard to ignore with the spread dropping below 3.

New York Giants +5 at Miami Dolphins The Giants’ offense wasn’t exactly cruising with Daniel Jones behind center, so is the drop-off to Mike Glennon, who’s likely to start, really worth two points as the market indicated? It’s possible but the line move seems more likely to be a touch too much.

Pittsburgh Steelers +5 vs. Baltimore Ravens The opening price of Ravens -3 was a bit too short, but now the spread seems to have drifted too far the other way. This could be a classic case of a team bouncing back from a humiliating loss — in this case, Pittsburgh’s 41-10 setback in Cincinnati last week — with an all-out effort to at least keep things close.

Tampa Bay Buccaneers -10.5 at Atlanta Falcons Tampa Bay should have the defensive personnel to solve the Cordarrelle Patterson riddle that has flummoxed much of the rest of the NFL. This number is too high to get involved, but it’s hard to ignore this is DVOA’s top-rated team against its worst-rated team.

Jacksonville Jaguars +13.5 at Los Angeles Rams Not only have the Rams not covered in their last five games — they haven’t even come close, falling an average of 12.5 points short of the line during the stretch. The market has continually overvalued them and left them as a stay-away team until they show signs of a rebound.

Chicago Bears +8 vs. Arizona Cardinals It could be rainy and windy on Sunday at Soldier Field, which would benefit the home team. It’s hard to actually back what’s been one of the worst teams in the NFL against one of the best, but this number seems a half-point too high given weather and Cardinal injury uncertainty.

San Francisco 49ers -3 at Seattle Seahawks This number is just right statistically, and there’s even a case to be made for Seattle considering the explosive-play ability it has maintained despite a downturn against a San Francisco defense prone to allowing such gains. But the thought of having to count on the Seahawks for another week after continued disappointments is too troubling.