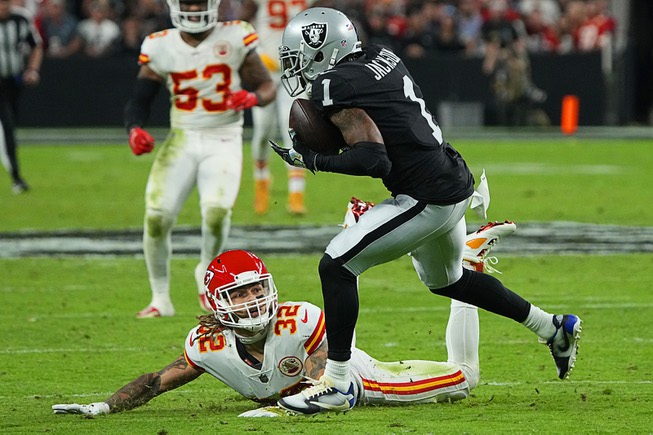 Six games are all that’s guaranteed to be left of DeSean Jackson’s tenure as a Raider.

But the veteran receiver, who turned 35 years old on Wednesday, hopes he can stay in silver and black beyond the rest of this regular season and any potential postseason games. Jackson doesn’t see himself as a rental player despite signing a 1-year, $2 million deal midseason to come to Las Vegas.

In his second news conference since joining the team, Jackson made it clear that he wanted to remain with the Raiders until he was ready to retire.

“I definitely hope this is my last stop,” he said at the team’s headquarters on Thursday. “I don’t want to continuously go stop to stop, just continuously learning new systems and stuff. I think here is a good spot, a good place with what the Raiders have going on here with the organization.”

The Raiders are technically Jackson’s third team over the past year, as he finished last season with the Philadelphia Eagles before signing with the Los Angeles Rams and appearing in six games this season. He asked for his release from the Rams seeking more opportunity elsewhere and thought he found it with the Raiders, but that looked questionable through his first two weeks.

Jackson played only 27 snaps in losses to the Chiefs and Bengals, catching one pass for 38 yards that ended in a lost fumble. Everything changed in last week’s upset win over the Cowboys, though.

Jackson was a focal point of the Raiders’ offense, scoring a touchdown on the third play from scrimmage and hauling in three total catches for 102 yards while on the field for 42 plays.

“I can’t remember the last time I played that much,” Jackson joked.

The large workload caused a calf strain that kept him out of practice Thursday, but Jackson described the injury as minor. He didn’t think it would keep him out of Sunday’s home game against the Washington Football Team, one of Jackson’s four previous “stops” in the NFL.

Everyone from interim coach Rich Bisaccia to quarterback Derek Carr preached patience with Jackson while he got off to his slow start with the Raiders. Even for a player in his 14th NFL season like Jackson, it takes time to acclimate to the NFL’s “very complex offenses,” in the receiver’s words.

But he’s accustomed to most of the playbook now and should be a bigger, more consistent part of the offense going forward.

“He could have had five or six catches for 180 yards or whatever,” Carr said of Jackson’s performance against the Cowboys, pointing out that he also drew a pair of pass-interference penalties. “That’s him just being able to handle more and be in the system more and being able to play more. I think that him being able to do that obviously gives us that stretch that we are going to need.”

Jackson is known as one of the best field-stretching, deep-threats in NFL history, dating back to his first six seasons with the Eagles from 2008-2013. He sits 37th all-time with 11,107 receiving yards and told the “All the Smoke” podcast earlier this year that he wants to firm up his Hall of Fame credentials in the final years of his career.

Whether he can ultimately do that with the Raiders as he’s expressed a desire to do will likely depend on the team’s success over the next month and a half. If they make the playoffs for the first time since 2016, it’s far more likely they’ll be interested in bringing players like Jackson back next year.

There wouldn’t be any protests from the locker room, where Jackson has quickly made an impression with his younger teammates.

“That dude is a legend,” running back Josh Jacobs said.

Jackson has started getting reverential words like those frequently over the last few seasons from new teammates and opponents alike. He says he always appreciates the respect, but there are times when it’s too much.

“Some days this year, I’ve been playing against dudes who are trying to shake my hand and congratulate me, like ‘I’ve been watching you since I was a little kid,’” Jackson said. “I’m like, ‘Man, we can save that stuff until after the game. I’ve got to play against you and I’m about to whoop your (butt).’ We can talk about all that friendship (expletive) afterwards.”

One of Jackson’s closest friends, since his collegiate days at California, was in town to celebrate his birthday in former Raiders running back Marshawn Lynch. That made it a rare night out on the town for Jackson, as he ventured to the Strip to celebrate.

But, even then, the festivities started and ended with dinner at Tao Asian Bistro at the Venetian.

“Being a California guy, I was always coming to Vegas to party but I’m not here to party now,” he said. “So, just kind of, when I’m off work, I just like to go home and just relax and get off my feet. Offseason, I’m sure I’ll have a little more fun.”

His offseason plans in Las Vegas extend just beyond the clubs and casinos, though.

Planting roots in a new home might be rare for a player at Jackson’s stage of his career, and the possibility might still be uncertain, but that’s what he’s after. He somewhat surprisingly feels like he’s fitting in better professionally in Las Vegas than he did in his native Los Angeles.

“It’s somewhere I look forward to finishing my career and being a spark, helping out these younger guys here and letting them know what it takes to be a professional, how you can make it a longevity out of this business,” he said.