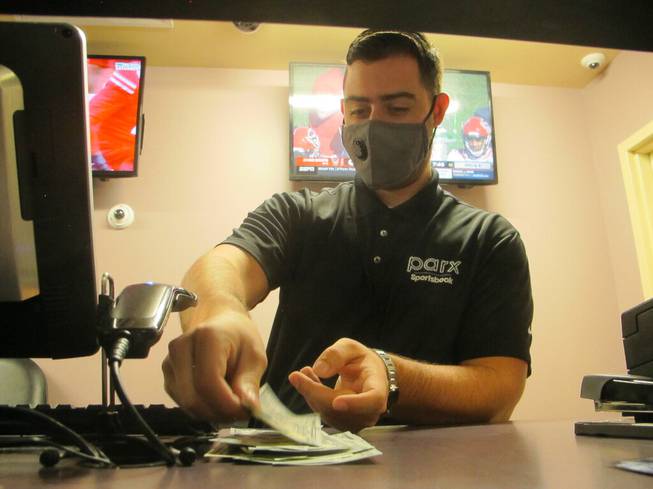 A clerk counts money at the sports book at Freehold Raceway on Oct. 24, 2020, in Freehold, N.J. With advertisements for sports betting blanketing the airwaves, some in the industry and their pro sports and technology partners are starting to ask how much is too much?

SECAUCUS, N.J. — If you’ve turned on a television in the last three years, chances are you’ve been inundated with advertisements for sports betting, and not only during game broadcasts.

Commercials featuring an emperor addressing the masses, a woman urging bettors to “make it rain” and companies enticing gamblers with the chance to turn a few dollars into a fortune are blanketing the airwaves. Concern is starting to grow over how much is too much.

At the SBC Summit North America, a major international sports betting conference being held this week in northern New Jersey, industry players are voicing concern about possible backlash they fear could lead to harsh government restrictions on such advertising, like what has happened in Europe.

“Is it annoying?” he asked. “Is it too much? It is an unsustainable thing.”

In the U.K., teams are subject to a “whistle-to-whistle” ban on sports betting ads appearing during the broadcast of their games. Italy has banned all gambling ads since 2019, and Spain prohibits sportsbooks from advertising on players’ jerseys or appearing as part of stadium names. It also restricts broadcast ads for any other forms of gambling to the hours between 1 and 5 a.m.

So far, the U.S. has not imposed such regulations on sports betting ads. And many in the industry want to keep it that way.

Jeff Fernandez, vice president of business development and ventures for the New York Jets, said the industry and its professional sports partners need “to make sure we don’t have to go to a whistle-to-whistle ban like what happens in the U.K.”

Joe Asher, president of sports betting for the gambling technology company IGT, also warned of “a backlash on the advertising going on today, and the excessive amount of it going on.”

It’s not something that lends itself to self-regulation,” said Asher, also the former CEO of gambling company William Hill. “I do worry about when we get to that phase.”

The Jets, like most other pro sports teams, heavily promote their numerous sports betting partners during games, including logos on the building, scoreboard mentions and ads for an in-stadium sports betting lounge.

One of the most frequent advertisers is Caesars Entertainment, whose ads featuring an actor playing Caesar seem to be everywhere. At Thursday’s conference, Ken Fuchs, senior vice president of sports for Caesars Digital, echoed the caution that the industry says it has regarding advertising.

Johnny Avello, director of race and sports book operations for DraftKings, said his company’s current level of advertising is working as planned.

“I was at the (train) terminal in Hoboken yesterday and I saw DraftKings on every kiosk and every wall,” he said. “And I think it’s effective. It works.”

PointsBet said advertising is needed to attract new customers and hold onto existing ones.

“We have taken a focused view by listening to what our bettors want and reaching them where they are,” said Kyle Christensen, the company’s chief marketing officer. “We have a philosophy not to spend irrationally but be aggressive and disciplined. It has served us well, made our users happy, and will continue to be our perspective as we look at future advertising budgets.”

And Thursday night, the NFL was set to debut a responsible betting ad during the Dallas Cowboys-New Orleans Saints game, urging people to “only bet what you can afford.”

FanDuel and BetMGM, two other major advertisers, declined comment. FanDuel became the official provider of sports lines and betting odds for The Associated Press in a commercial agreement starting in April 2021.