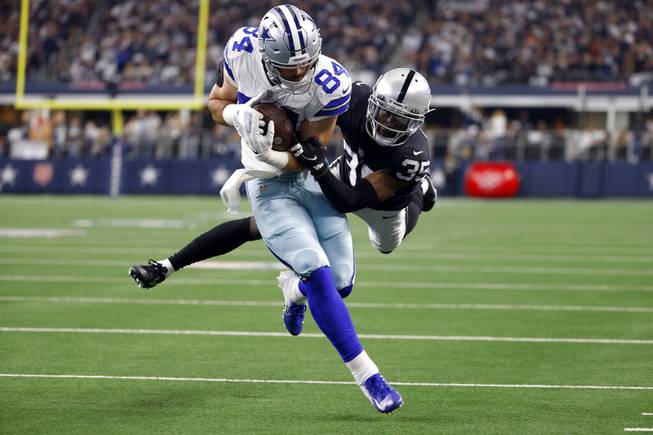 Dallas Cowboys tight end Sean McKeon (84) shakes off a tackle attempt by Las Vegas Raiders cornerback Brandon Facyson (35) as he sprints to the end zone after catching a pass for a touchdown in the first half of an NFL football game in Arlington, Texas, Sunday, Nov, 25, 2021. (AP Photo/Ron Jenkins)

Raiders defensive coordinator Gus Bradley was ready to give his unit mostly positive marks while reviewing the film of last week’s 36-33 overtime victory over the Cowboys. Then he got to the fourth quarter.

His satisfaction turned to frustration when he rewatched and diagnosed how Las Vegas gave up a series of long pass plays late to Dallas. It wasn’t so much that the Raiders allowed the Cowboys to score a lot of points or even to come back that irked Bradley, but more the way they allowed it to happen.

“We had some busts show up,” Bradley said in a news conference earlier in this week. “We gave up three explosive plays just on not staying on top — some of the principles we teach over and over again.”

“Busts,” or breakdowns, in pass coverage have afflicted the Raiders frequently over the last month or so, becoming more of a problem than they were early in the season. They’ve slipped to 25th in the NFL in pass defense by Football Outsiders’ DVOA ratings and 27th in expected points added per dropback after having been closer to league-average by both metrics going into last month’s bye week.

It’s an area the Raiders (6-5) will need to fix in the final six games of the regular season, starting with Sunday’s home date against the Washington Football Team (5-6), if they want to reach the postseason.

“I think we’ve just got to be locked in the whole entire game,” rookie cornerback Nate Hobbs said. “I think we’ve had a couple games where we put out a really good performance as a defense then that fourth quarter we tend to, or we have let it slip away and have big plays.”

Hobbs is one of the biggest reasons the issue hasn’t become more pronounced as the Raiders are still allowing only a better-than-average 6.3 yards per pass attempt this season. They also have been stellar in the middle of the field where the fifth-round pick out of Illinois primarily plays as the slot cornerback.

It’s short passes to the edges where Las Vegas is struggling the most, according to DVOA. Bradley has noticed the same thing, pointing out that opponents have adjusted their game plans to account for the consistent pressure of Maxx Crosby and Yannick Ngakoue and found success.

“We are seeing a lot more quick game,” he said. “That’s the big thing that I think we’ve seen the last couple weeks, is just all the quick game even out of the shotgun. That’s something we’ve addressed with our guys.”

And most of “the quick game” is directed towards the opposite side of No. 1 cornerback Casey Hayward. The veteran cornerback has been steady throughout his first season with the Raiders and opponents have reacted by largely avoiding him.

Despite having played in all 11 games, Hayward has only been targeted by opposing quarterbacks 38 times per Pro Football Reference. That’s fewer targets than fellow starter Brandon Facyson has attracted in only five starts as he’s been thrown at 48 times — the same amount as Hobbs.

Strong safety Johnathan Abram, who’s more suited towards run support than pass coverage, leads the team with 57 targets. A number of big plays — particularly in a 41-14 loss the Chiefs — have come against him.

“I think they try at least one of us once or twice a game, but they haven’t been trying (Hayward) as much as the boundary corner or the other corner in the game,” Hobbs said.

Not all the onus is on the secondary. In fact, linebackers are responsible for many of the coverage areas where Las Vegas has been most vulnerable in Bradley’s scheme.

Teams have been able to manufacture matchups with the Raiders’ Denzel Perryman and Cory Littleton, both of whom haven’t been as reliable in the pass game as they have against the rush.

But Bradley isn’t expressing much concern and thinks concentrating on assignments and having a stronger attention to detail can mostly fix the problems. Washington could make that difficult, however, as confusion is a big part of its modus operandi according to Bradley.

“They do a lot of window dressing, a lot of shifts, a lot of motion,” he said. “And that’s the challenging part of it, just to get lined up and be on our responsibilities there.”

Las Vegas only needs to survive one more week before some secondary-specific help arrives. Interim coach Rich Bisaccia said Friday that the plan was for cornerback Trayvon Mullen to return for next week’s game in Kansas City.

Facyson has filled in admirably for Mullen all things considered, especially keeping in mind he was on the Chargers’ practice squad before the Raiders claimed him, but the latter is a more proven player. Mullen had been playing well before going down with a toe injury in a Week 4 loss to the Chargers.

That means the Raiders could have their whole intended starting secondary intact for the stretch run. In the meantime against Washington, they’ll just need to avoid giving up the type of chunk plays that nearly cost them the game against the Cowboys.

“Up until then, I thought we were for the most part playing our principles real well,” Bradley said.