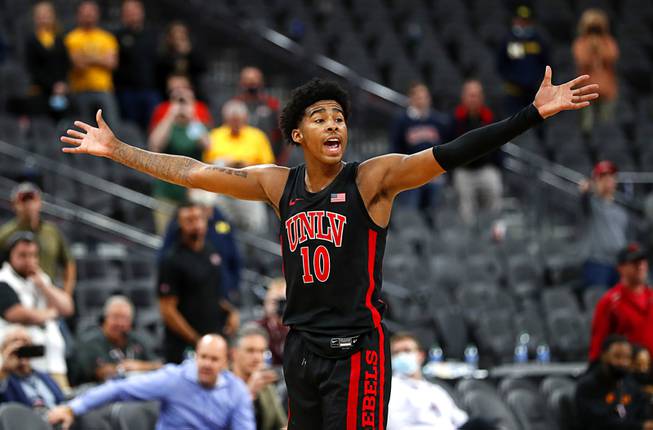 UNLV Rebels guard Keshon Gilbert (10) prepares to defend against the Wichita State Shockers with 5.5 seconds left in the second half of a game in the Roman Main Event basketball tournament at T-Mobile Arena Sunday, Nov. 21, 2021.

What to make of UNLV football’s season

The Sun’s Mike Grimala and Ray Brewer discuss what’s next for the UNLV football team after a 2-10 season. Already, its best defensive player announced plans to transfer. And what about the UNLV basketball team? What do you make of the 4-3 start?

The past two weeks have not been kind to UNLV basketball. The scarlet and gray have dropped four straight games to Division-I opponents, and the last two losses have come by 22 and 19 points, respectively. It’s a bona fide slump.

And the schedule isn’t easing up this weekend, as Kevin Kruger will take his squad to the Bay Area for a Saturday showdown at 8-0 San Francisco.

Can UNLV turn things around against a quality Dons squad? Three keys to watch:

Kevin Kruger was not happy with his team’s shot selection in Wednesday’s blowout loss at SMU, so the first-year head coach addressed it in practice.

On Friday, Kruger and his staff broke out a roll of red duct tape and marked off the floor at the Mendenhall Center. The message: Shots from certain high-percentage areas of the court are acceptable, while shots from outside the taped areas are not.

It’s Kruger’s latest attempt to get his players to buy in to his offensive system. For the season 25.3% of UNLV’s shots have been unappealing 2-point jumpers, according to Hoop-Math, which ranks outside the Top 200 nationally.

Kruger believes better shots will lead to better offense. It’s not exactly a revolutionary idea, but it does require the players to embrace the plan.

Senior guard Bryce Hamilton found himself benched for a short stretch on Wednesday after he took a questionable shot in the opening minutes against SMU. Shot selection has been an issue for Hamilton; he leads UNLV in scoring with 15.3 points per game, but he is shooting 38.5% from the field. More than 42% of his field-goal attempts have been mid-range jumpers, and he has made just 31.0% of those.

Last year, Hamilton had an agreement with then-UNLV coach T.J. Otzelberger that mid-range jumpers would be allowed—as long as Hamilton was making them consistently.

Hamilton said Kruger is more strict when it comes to acceptable attempts.

“They do a lot of stats and stuff,” Hamilton said. “It just shows where we’re good, offensively, and the shots we need to take as a team. That’s just something they really emphasize and something we’ve got to do to get better shots.”

UNLV will get an up-close look at a team that practices immaculate shot selection on Saturday when they face off against undefeated San Francisco. Under third-year head coach Todd Golden, the Dons have become one of the most analytically-inspired teams in the nation. They attempt open 3-pointers and layups and almost nothing else, as they rank No. 18 in the country in mid-range shots (14.5% of attempts).

That system has resulted in a Top-50 efficiency offense according to KenPom, and USF is No. 40 in defensive efficiency as well. Put it together and the data-driven Dons are 8-0.

Kruger clearly admires the way Golden has installed his system.

“Todd is awesome, he’s done an unbelievable job there,” Kruger said. “They’re patient. They know each other. They read each other really well. They have a really good chemistry about themselves. The guys coming off handoffs, they know if they’re going to shoot it, they know if they’re going to drive, they know when the guy is going to roll vs. pop. When you play teams like that it’s tough because they’re like a machine offensively.”

In addition to stylistic adjustments, Kruger could implement some personnel changes going forward as he attempts to find the right mix for the 4-4 scarlet and gray.

With power forward Victor Iwuakor out with an arm injury and center David Muoka playing inconsistently in spot minutes, there could be an opportunity for sophomore forward Reece Brown to claim a more prominent role. Brown got 12 minutes against SMU (compared to Muoka’s eight minutes) and posted eight points and one rebound.

Could that performance, in the context of UNLV’s tenuous frontcourt depth chart, lead to more minutes for Brown?

“Reece went in there and did everything we asked him to do,” Kruger said. “He cut hard, he finished around the rim, he rebounded well. Reece absolutely took full advantage of the opportunity in Dallas.”