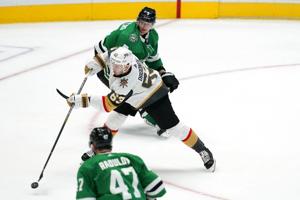 LAS VEGAS (FOX5) — Fresh off their big win against Calgary over the weekend, the Golden Knights continue their four-game homestand against what off the hottest teams in the National Hockey League, the Dallas Stars.

Dallas has won seven straight and nine of their last ten games.

“It’s tough to know what the Stars are, I think they’re playing now like everybody thought they were going to be,” explained Golden Knights Head Coach Pete DeBoer. “I think you have to throw out the first 10 of 15 games, you look at their depth on paper, when you have Seguin and Benn in the depth of the lineup you’re a deep team offensively. You throw those defenseman that can jump into the play, I think when I look at them on paper, they’ve done the same thing here for the last four or five years. They play to their identity they’re big, they’re heavy, they’re skilled, have defenseman that can jump in the rush, and when they get really good goaltending like they are lately, they’re a real tough out.”

Wednesday night will mark the 16th meeting all-time between the two franchises and just the fourth time the Golden Knights have been able to host them at T-Mobile Arena.

The last time these two clubs met was back in October, in Dallas, where the Golden Knights rallied for a 3-2 win in overtime.

“It seems like the last couple games you’ve seen them score some goals for sure,” explained Golden Knights defenseman Shea Theodore. “I think from our game perspective we’re starting to turn the corner with having guys back. I think it’s going to be a different test than when we were in Dallas and had a limited lineup, but it’s going to be a fun game.”

The Golden Knights held an optional skate Wednesday morning at City National Arena. Nolan Patrick, who is not expected to be available vs. the Stars was on the ice in a red, non-contact jersey.

Raiders look to adjust, block outside noise as they prepare for Chiefs | Las Vegas Sports