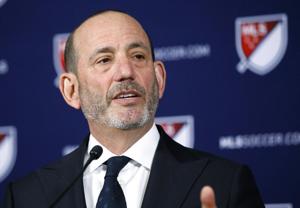 Garber shared his remarks ahead of Saturday’s MLS Cup between the Portland Timbers and New York City FC during his annual “State of the League” address.

Although no location has been officially selected yet, the league’s current plan is to expand to 30 teams.

During Tuesday’s address, Commissioner Garber noted that Las Vegas is the favorite for the 30th expansion. The group is led by businessman Wed Edends, MLS notes.

“We’re making progress in Las Vegas,” MLS reported that Garber said during his address. “We’re excited about the market, as are all the other leagues in North America. Wes is a guy we have long-standing relationships with, he had looked at other MLS clubs over the years. We’ll continue those discussions and continue to try and get something done with our 30th team within the next 10 months.”

Garber also noted that the league is still in discussions with other markets as well, such as Phoenix and San Diego.

Once a market is selected, according to the MLS, the timeline for entering the league will be determined, as Garber has ruled out anything before 2023.

“We have not yet determined when that 30th team will start playing,” Garber said, according to MLS. “The 30th team will not be in by 2023 [for Leagues Cup]. That’s something everybody should be aware of.”