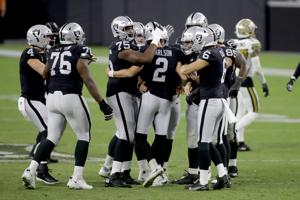 LAS VEGAS (FOX5) — The Raiders have solidified their kickers for the next four years after signing kicker Daniel Carlson and punter A.J. Cole to four year contract extensions.

Carlson’s deal is worth a reported $18.4 million with $10.2 million guaranteed which would make him the NFL’s third highest paid placekicker.

“The organization has always put a lot of faith and trust in us throughout the years and I think this is really cool to be able to commit back to them and come to the agreement that we’re going to give you the next four years of our play and hopefully more and just go try and chase after Super Bowls, playoffs and championships,” Carlson said.

Cole’s deal is worth a reported $12.4 million with $5.9 million guaranteed.

“The Raiders have such a rich history at the specialists positions so punting and kicking here means a little bit more than just about anywhere else,” Cole said. “So it means a lot that they’ve invested in us and believe in us and are thankful for the work we’ve done and will continue to do.”

Both Carlson and Cole  are candidates to make the Pro Bowl this year, which will be played at Allegiant Stadium.