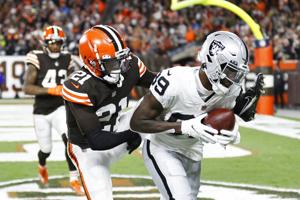 Quarterback Derek Carr said while this is a week to week league, there’s nothing wrong with momentum.

“I think it helped out confidence,” Carr said. “I’m not saying that we were lacking any, but you’ve got to win games. It’s one of those moments where you’re like, here we go. There was a lot on the line in those last three minutes, and for our defense to get that stop and for our offense to be able to go down there and Daniel to make that kick, it says a lot about our team and the will and desire to win. Hopefully it jump starts us. This is the time to get hot and hopefully it will be our time this year.”

Carr tweaked his ankle in the third quarter but returned to play the rest of the game. Two days later he said the injury is not an issue for Sunday’s game against Denver.

“Nothing out of the normal,” Carr said. “I was able to do everything that we needed to do today and I’ll be full all week. But that’s everybody, we’re dealing with everything. At this time of the year, if you’re don’t feel something then you might not be playing the game right. Everyone is feeling something but I’m fine. I’ll be ok.”

Sunday afternoon’s game against Denver kicks off at 1:25 at Allegiant Stadium.