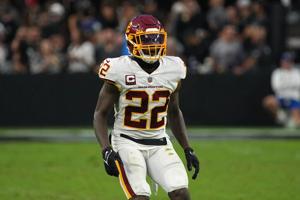 LAS VEGAS (FOX5) — A 29-year-old Las Vegas woman was killed in a crash involving Washington Football Team’s Deshazor Everett on Thursday in Virginia, according to a spokesperson for the Loudoun County Sheriff’s Office.

According to authorities, the crash occurred around 9:15 p.m. Thursday night in Loudoun County, Virginia.

The driver of a 2010 Nissan GT-R, identified as 29-year-old Deshazor D. Everett of Brambleton, Virginia, was traveling north on Gum Spring Road near Ticonderoga Road when the vehicle left the right side of the roadway, struck several trees, and rolled over, the sheriff’s office said.

Authorities said the passenger, Olivia S. Peters, 29, of Las Vegas, Nevada was taken to StoneSprings Hospital where she succumbed to her injuries.

Everette was taken to an area hospital where he is being treated for serious but non-life-threatening injuries.

The Washington Football Team released a statement Friday morning on the crash. Everette is a defensive back for the team.

The Loudoun County Sheriff’s Office says the cause of the crash remains under investigation.