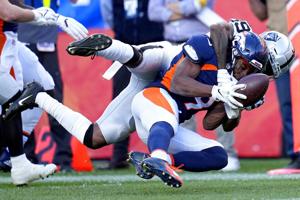 With safety Johnathan Abram also out after season ending surgery on his shoulder, the Raiders are thin in the defensive backfield heading into Sunday’s game against the Broncos.

“We’ve just got to adjust the best we can,” defensive coordinator Gus Bradley said. “Fortunately, the coaches have done a good job all during the season, we try to split up our reps so the 2’s get reps in a group of plays. We’re going to have to rely on that part of it, our preparation.”

The Raiders and Broncos are essentially in a playoff game Sunday. The winner stays alive for the post season and the loser is all but eliminated. It adds even more intensity to this rivalry game. The Raiders know the implications and say they will ready.

“Very hungry, very concentrated and focused,” defensive lineman Solomon Thomas said. “We have a chance to make the playoffs and we know we’re in the hunt. That’s why we’re here. You want a shot in the tournament, you want a shot to go win the big thing. That’s all of our goals and collectively we’re working hard to get there and make that happen.”

Kickoff at Allegiant Stadium is set for 1:25 p.m. on Sunday.