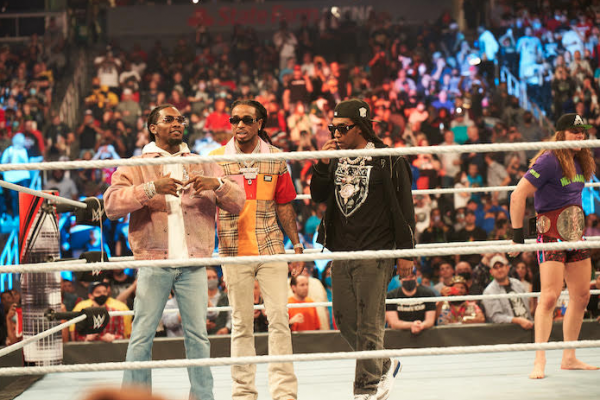 WWE celebrated the New Year by hosting its first PPV event on New Years Day at the State Farm Arena in Atlanta, Georgia. Titled Day One, the event is the WWE’s first New Year’s themed event in over a decade and the first ever held on New Year’s Day. Stars from WWE’s Smackdown and Raw brands gathered in front of a sold out arena for the event featuring  Becky Lynch and Liv Morgan, RK-Bro vs. The Street profits for the Raw Tag Team Championship , The Usos vs The New Day for the Smackdown Tag Team championship and the fan favorite Big E vs. Brock Lesnar vs. Kevin Owens vs. Seth Rollins vs. Bobby Lashley for the WWE Championship.

Rap artists Migos, whose song “Straightenin” is one of the official tracks for Day 1, got involved in the festivities making an epic entrance with WWE Tag Team Champs RK-Bros. Also WWE fan Westside Gunn was seen ringside enjoying the show and engaging the crowd throughout the night. With such a great view of the event, they shared several posts on social media with fans and WWE stars, giving their followers the ultimate inside experience.

Leading up to Day 1, the WWE teamed up with influencers to give some of the WWE Universe’s biggest fans the chance to win tickets from several social media giveaways held by Influencers like SexxyStaceFace, Kasfacts, and more. Rapper Warren Wint, Ms Hattan, Desiree Salley of Atlanta Influences Everything, and more attended the event in the skybox, showing support for the WWE and prompting fans to engage on Social media.

“Day 1 was an incredible cross cultural event where we got to see the best from sports entertainment and hip hop come together”, said Hot97’s Peter Rosenberg. “The best part for me was seeing the reaction from the Migos’ fans in Atlanta. They looked just as happy to see The Migos be a part of the WWE as the Migos seemed to be doing it.”

The Source |New Music From Metro Boomin Is Arriving Soon