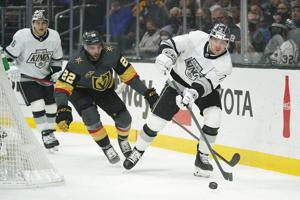 LOS ANGELES (AP) — Jonathan Marchessault had two goals and an assist in the Vegas Golden Knights’ 6-3 victory over the Los Angeles Kings on Tuesday night.

Reilly Smith and Chandler Stephenson each added a goal and an assist as Vegas returned from the extended Christmas break to push its road winning streak to six games. Keegan Kolesar and Mattias Janmark also scored, and Laurent Brossoit made 24 saves.

“They get the job done,” Stephenson said. “Everybody that is in the lineup is experienced and knows how to just kind of have a greasy, hard-working road game, so I think that was a little emphasis tonight.”

Jonathan Quick was pulled early in the second period after allowing five goals on 15 shots for the Kings, who had not played since Dec. 19 after their past three games were postponed because of the NHL’s ongoing issues with COVID-19.

“Last time we played Vegas at home, we did all those details really good and we were on point for 60 minutes. Tonight, we weren’t really there in the beginning and it cost us a couple goals,” Kempe said.

Stephenson buried a one-timer from the slot on the power play 1:21 into the second for a 4-1 advantage, and Janmark scored at 2:47 to bring Quick’s night to an early end.

It was the second straight start in which Quick allowed five goals, following a 5-1 loss at Carolina on Dec. 18.

“We wanted to make sure that we made life difficult for him by getting people to him and getting pucks to the net, so thankfully we were able to find a few goals that way,” Spott said.

Vegas took a 3-1 lead out of a frantic first, when all four goals were scored in a span of 1:16 midway through the period.

Smith tipped in Marchessault’s pass for a power-play goal to get the Golden Knights on the board at 9:53, and Kolesar redirected Ben Hutton’s slap shot from the left point to make it 2-0 just 26 seconds later.

It took another 13 seconds for Kempe to get the Kings within 2-1. He chased down Drew Doughty’s stretch pass that caromed off the boards to bury a one-timer from the slot.

But then Marchessault was able to backhand in William Karlsson’s shot that struck the post to restore a two-goal margin with 8:51 remaining in the period.

“Yeah, that was pretty crazy,” Hutton said. “I mean, not every time you’re watching or playing a game there’s that many goals that quick. So that was good to see a couple of the boys bury a couple goals. That was fun.”

Los Angeles was able to score a couple of goals in the second and third, including Moore getting his third career short-handed tally, but coach Todd McLellan said it was more about the Kings finding their game for the next one than truly staging a comeback.

“We played our way in,” McLellan said. “Embarrassment sometimes does that to you as well, so we do have a lot of pride in there. There’s a lot of strong-willed guys, and they got it back. … But you’re not scoring six goals … seven goals I guess we would have needed tonight against that team, so the rest of the night was just about trying to get back into playing the way we need to play.”

Marchessault got his his third multigoal game when he found the back of the net 1:55 into the third. It was also his first three-point game of the season.

“I think he’s just always around the puck, always working hard,” Stephenson said. “Has that compete in him. Ever since I’ve played against him, whether in minors or the NHL, he’s always been like that.”

Kopitar had the secondary assist on Kempe’s goal, his 673rd with Los Angeles to break a tie with Gretzky. The Great One had an astonishing 672 assists in 539 games for the Kings.

NOTES: Vegas G Robin Lehner (lower body) and F Mark Stone (upper body) did not play. … Stephenson has one goal and three assists during a three-game point streak. … Alex Turcotte, the fifth overall pick in the 2019 draft, made his NHL debut for the Kings. He had a minus-1 rating and won five of 10 faceoffs in 12:08.

Copyright 2021 The Associated Press. All rights reserved. This material may not be published, broadcast, rewritten or redistributed without permission.