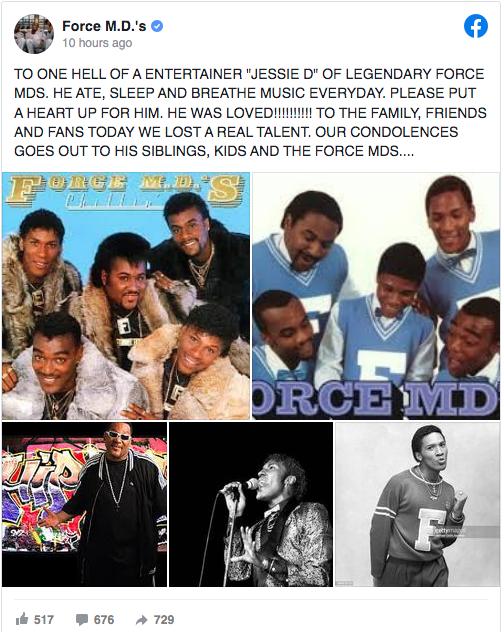 According to an official post from the Force MDs verified Facebook page which was posted on Thursday (January 4), Force MDs founding member Jessie Lee Daniels aka Jessie D has died. He was 58 years old. Daniels’ cause of death has not been revealed.

The Staten Island natives were pioneering in the New Jack-R&B sound, which landed them a deal with Tommy Boy Records for their debut album Love Letters. The appeared in the 1985 cult classic Krush Groove and later appeared on Ghostface Killah of the Wu-Tang Clan’s Ironman album.

Daniels is the fifth member of the group to pass away. Prior to him, Charles “Mercury” Nelson died from a heart attack in 1995, Antoine “T.C.D.” Lundy died of Lou Gehrig’s disease in 1998, while Trisco Pearson died of cancer in 2016. One of the group’s former DJs, DJ Dr. Rock, also passed away in 1996 due to natural causes.