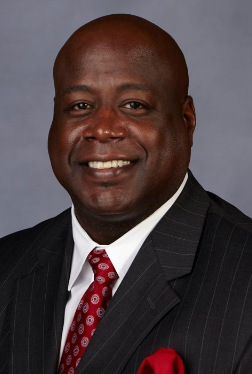 Harper will serve as the interim role over the next several months as the university launches a national search for a permanent AD.

“Erick brings a wealth of experience in university athletics to the position, and I’m confident that he’ll successfully lead UNLV Athletics during this transition period,” Whitfield said. “He has great passion for our university, this community, our student-athletes and our coaches, and I believe he’s the right person at this time to lead our talented department staff and continue the positive momentum of UNLV Athletics.”

Harper has been in university athletics administration for more than 30 years. He joined UNLV as senior associate athletics director for development in 2012, where he has overseen fundraising efforts for the department and has served as a sport administrator for multiple sports, including football and currently women’s golf. Prior to UNLV, Harper was associate athletics director for football operations at the University of Arizona from 2003-11. He began his athletics administrative career at Kansas State University (1990-2003), where he served in development, marketing, and compliance roles and as a sport administrator for multiple sports.

“I’m incredibly honored to serve as UNLV’s interim director of athletics,” said Harper. “We have many great opportunities in front of us to continue growing our university and our athletics department, and to reach heights never imagined at UNLV. The time for UNLV to rise is now and together we can achieve great things.”

Harper received his bachelor’s degree in 1992 from Kansas State University, where he was a four-year starter and standout defensive back for the Wildcats football team. He earned a master’s in organizational management and leadership from Ashford University. Harper is married to Patrice Hester-Harper (UNLV grad and current associate vice president with the UNLV Foundation) and they have two daughters, Sydney (14) and Avery (5).