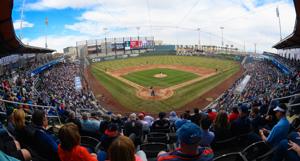 LAS VEGAS (FOX5) — The Las Vegas Aviators announced that tickets for 2022 Big League Weekend at Las Vegas Ballpark will go on sale on Tuesday, January 11 at 12:00 p.m. through Ticketmaster.

The Oakland Athletics and Cleveland Guardians will square off at the home of the Aviators on Saturday, March 12 and Sunday, March 13, with 1:05 p.m. first pitches each day. This is Cleveland’s fourth Big League Weekend appearance, and Oakland’s seventh appearance.

The two teams squared off in the inaugural Las Vegas Ballpark Big League Weekend on February 29 and March 1, 2020, with the Athletics winning both exhibition games.

Individual game tickets for Big League Weekend start at $25.00 per seat. More information on tickets can be found through the Aviators ticket office at (702) 943-7200.