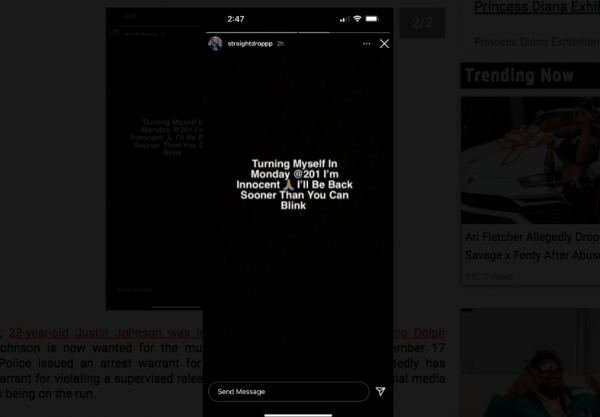 As previously reported, 23-year-old Justin Johnson is wanted for the shooting death of famed Memphis rapper Young Dolph. Less than a week after the FBi issued a warrant for his arrest and a reward for his capture, Johnson has taken to social media to say that he plans to turn himself in tomorrow(January 10).

Johnson is on the run for the murder as well as violating the terms of his supervised released for a previous charge.

Johnson posted on his @straightdropp IG story, saying “Turning myself in Monday [at] 201.” He added on, “I’m innocent 🙏🏾 I’ll be back sooner than you can blink.”

Johnson is wanted for the November 17 shooting death of Young Dolph. The surveillance footage shows two shooters in hoodies and sweats fire at Dolph before escaping in a white Mercedes Benz, so authorities are still looking for a second shooter.

TheSource.com will update this story as the details develop.