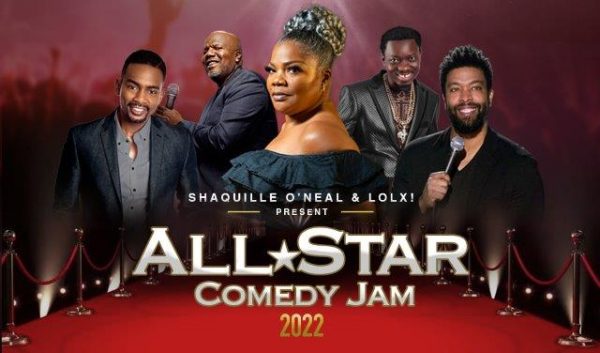 Kevin Hart’s multi-platform comedy brand, Laugh Out Loud, has announced the long-awaited return of “All Star Comedy Jam.” The iconic event, which began as a collaboration between NBA Hall of Famer Shaquille O’Neal, media personality and entrepreneur Jeff Clanagan, and LOL CEO Jeff Clanagan, will kick-off Superbowl Weekend with a special one-night-only experience on Thursday, February 10 at Microsoft Theater at L.A. Live.

“From delivering numerous sold-out tours to being among the first to give a national stage to current comedy legends such as Mike Epps, DeRay Davis, and Kevin Hart, All Star Comedy Jam has been a fixture on the comedy scene, dedicated to elevating the brightest up-and-coming comedic voices,” said Shaquille O’Neal. “I’m looking forward to working with the Laugh Out Loud team to bring this iconic franchise back to a live audience for what is sure to be an unforgettable night of comedy.”

DeRay Davis will emcee the event, which will feature hilarious performances from some of the biggest names in comedy, including Bill Bellamy, Michael Blackson, Earthquake, and Mo’Nique, as well as surprise special guests, musical acts, and the man himself, Shaquille O’Neal, from the front row.

“There is nothing like a night of live comedy, and I couldn’t be more excited for the return of All Star Comedy Jam,” said Laugh Out Loud CEO, Jeff Clanagan. “What started as an idea between Shaq and I for a comedy show during All-Star weekend, has grown into a true comedy staple that showcases some of the heaviest hitters in comedy alongside the most promising up-and-comers, and this return feels better than ever. LOL’s mission is to keep the world laughing together, and right now, a good night with a lot of laughs is exactly what we need.”

Tickets are available now via axs.