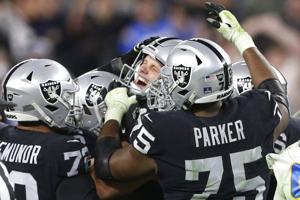 LAS VEGAS (FOX5) –Ahead of Saturday’s playoff game, Pittsburgh Steelers fans all over the country are showing their generosity to local nonprofits. ​

It all started after the Raiders played against the Los Angeles Chargers on Sunday when Raiders’ kicker, Daniel Carlson kicked the field goal that won the game and landed the silver and black in the playoffs.

Since the game did not end in a tie, the Steelers are also going to the playoffs.

Steelers fans were so grateful, they wanted to thank Carlson in a special way. They donated to Las Vegas nonprofits that Carlson supports, including After-School All-Stars.

After-School All-Stars is an after-school program for at risk youth. Students involved get food, homework help, and can participate in a program of their choosing, like dance or sports.

Jodi Manzella is the executive director of the nonprofit and said Carlson has been a big supporter for about a year now.

She said the donations from strangers has been overwhelming.

“It’s amazing. Truly it is,” Manzella said. “To see individuals from across the country, reach out to support our organization here in Las Vegas and don’t even live here. But it truly goes to benefit the students that we work with throughout the year. That’s 7,000 kids so this will help tremendously.”