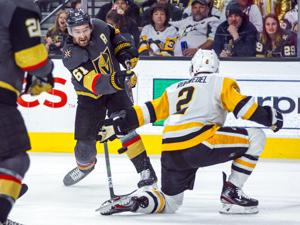 LAS VEGAS (FOX5) — After a six-day break, the Golden Knights are back in action on Monday night when they play host to the Pittsburgh Penguins at T-Mobile Arena.

This will be game seven of eight straight at home for the Golden Knights, who have struggled on home ice this season, winning just two of their previous six games. Thanks to a couple postponements north of the border, the VGK have an extended stay here at home, giving them more time to rest and reset as we approach the midway point of the regular season.

“You don’t know how you’re going to come out of these breaks,” explained Golden Knights forward Mattias Janmark. “You have to be detailed; I think the coaches are trying to prepare us for a really good team here. We have to be detailed in our game and play simple hockey, get our legs it in and we should be fine.”

“We’ve looked around the league and a lot of teams stumbling coming out of these breaks, so we want to be the exception to the rule,” said Golden Knights head coach Pete DeBoer. “For me, that’s the first ten minutes, not beating ourselves, not turning pucks over, not taking penalties, getting our legs under us and getting our game back.”

“The start is huge,” explained Golden Knights defenseman, Dylan Coghlan. “We want to start the game with the puck, have that first possession. It’s one of the things we talked about during the break, starting with the puck in the neutral zone more, take control of the game. Obviously, we had five days off, our legs are ready, the guys are excited to play so it should be exciting.”

The star-studded Penguins come into Vegas as one of the hottest teams in the National Hockey League, winning eight of their last ten games. Evgeni Malkin returned from injury over a week ago, giving an already talented team, one of the deepest group of centerman in the NHL.

“You have to get up for a team like this. it’s not just the centers, they’re going to challenge every part of your game, offensively, defensively, special teams, that’s what really good teams do,” explained DeBoer. “This team over the last two months, if not the best in hockey, has been right there. From a center perspective, it starts with starting with the puck, digging in faceoffs, you have to get supported wins to help our centerman out and then for me you’ve got three guys that can all drive a line with Crosby, Malkin, and Carter. It’s whoever gets over the boards has to be aware of that and get the job done, forwards and defenseman as a five-man group.”

“They’ve been the best team in the league lately, haven’t played them in a while too,” said Janmark. “Expecting a really good game, we’re going to have to bring our best and play really detailed, stop their best guys, and find our game. It’s going to be a tough challenge, but it’s going to be a fun one too.”

The Golden Knights haven’t beaten the Pittsburgh Penguins on home ice since January 19, 2019.