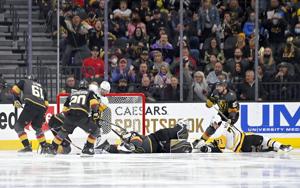 LAS VEGAS (FOX5) — For just the second time in franchise history, the Golden Knights blew a 3-0 lead, losing to the Pittsburgh Penguins 5-3 Monday night at T-Mobile Arena. It was the first time they gave up such a lead and lost in regulation.

“Every team in the league is going to blow a 3-0 lead at some point during the season,” said Golden Knights head coach Pete DeBoer following his team’s third straight loss. “The key is what do you learn from it. That’s a very good team over there, resilient team, with a lot of veterans, great players. It comes down to little details at key moments in the game and they were better than us in some of those.”

The Golden Knights continue to struggle on home ice this season, losing for the 12th time in just 24 games. To put that in perspective, during their inaugural season, the Golden Knights lost a total of 12 times in 41 games, and just last season in 28 regular season games played at T-Mobile Arena, the VGK lost just seven of those.

“Never want to lose at home, we pride ourselves on being a good home team,” explained Golden Knights captain Mark Stone. “It’s been a tough stretch, playing some good teams, but you have to find a way to get points in those games, getting to overtime, finding ways to get points. Up 3-0 after the first period, can’t walk away with nothing. Another two days off between here, some soul-searching to do, we have a desperate team coming in, Montreal, we have to be ready to play and finish the homestand off right and get ready for the road.”

“I think there were some real good lessons for us as a group to come out of it, and it’s on us to apply it (Thursday) night and the upcoming road trip because we don’t have any easy games on the schedule,” said DeBoer.

The Golden Knights, like every team in the league, has had a revolving roster due to injuries and COVID, but some teams have been hit harder than others when it comes to the personnel absent from the ice.

“Never like to make excuses, missing bodies, but we’re missing some good players,” said Stone. “Guys in the backend, in the past we’ve had those sustained o-zone shifts where we haven’t had to play in the d-zone, that’s been our issue of late. (Alec) Martinez hasn’t been in, he’s been a staple in leadership and a commitment to team defense, excited to get him back. Even with (Nic) Hague out, he’s been a huge part of it, we haven’t had our whole d-core since early November.”

“Some of that has been the short lineup, it’s been hard to get into that four-line, identity game where we’re grinding teams,” explained DeBoer. “When we have had the opportunity to have a real healthy lineup, I think we’ve been able to do it more than at other points. I think we’re still a little soft around our own net too. Hague and Martinez are both defenders, not to make excuses because everyone is dealing with guys out of the lineup, but those are two guys that are tough to play around your own net and we miss those guys .”

Alec Martinez exited COVID-19 protocols on Tuesday, skating with the team for the first time in 10 days. DeBoer did not have a timeline on when he could return to the lineup.

The Golden Knights will close out this 20-day, eight game homestand on Thursday against the Montreal Canadiens in a Stanley Cup Semifinal rematch from a season ago. After that, the guys in gold leave the friendly confines of the Fortress and hit the road, playing four of the top seven teams in the Eastern Conference; Washington, Carolina, Florida, and Tampa Bay.

“The history of our group here has been when we play with a little fear in our belly, we’re usually pretty good,” said DeBoer. “We should have that in these upcoming games.”

Stephen A. Smith after COVID: If I wasn’t vaccinated, ‘I wouldn’t be here’ | COVID-19