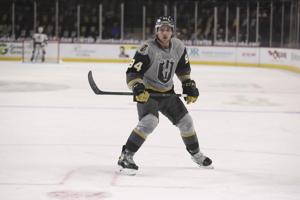 The 22-year-old is in his third season with the Golden Knights organization, signing with the team as an undrafted free agent in 2019.

“Brayden embodies what it means to be a Silver Knight,” said Head Coach Manny Viveiros. “He has a tremendous work ethic and has established himself as a leading voice in our locker room. He has experience serving as a captain in the past, and we know he’s a young man that can set a strong example to help our players win hockey games and reach their full potential.”

Pachal has served as an assistant captain up until this point in the season and carries some captain experience when he held the same title for his junior team, the Prince Albert Raiders from 2018-19, leading them to a WHL championship.

During his AHL career, Pachal has put up 22 points in 101 games.

Patrick Brown served as the first captain in Silver Knights history at the start of the inaugural season in 2020-21. After he was permanently recalled to the Vegas Golden Knights, the coaching staff assigned the captaincy to defenseman Ryan Murphy.

Pachal’s first game as captain will be Friday night when the Silver Knights face the Stockton Heat at Stockton Arena.