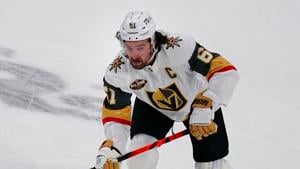 LAS VEGAS (FOX5) — The Golden Knights close out their eight game homestand Thursday night against the Montreal Canadiens, hoping to end their three-game losing streak, and snap out of their worst slump of the season, losing five of their last six games.

“It’s tough, I don’t think we’ve played once with a full roster, but everyone is dealing with that kind of issue and it’s going to be the same deal the rest of the year,” said Golden Knights forward William Carrier. “I like where our game is at overall, a lot of guys have been stepping up with guys go out, injuries and COVID. We like where we are, but still a lot of work to do before playoffs.”

There are no easy games in the National Hockey League, but the Golden Knights have an opportunity to take advantage of a team who currently sits dead last in the league standings.

“It’s funny, you look at them, and they’re the only team in the league that has more man games lost to injuries, than we do,” explained Golden Knights head coach, Pete DeBoer. “You can see what they’ve dealt with and key guys too, like us, Price and Weber at the top of that list. They’re better than their record indicates, they’ve been able to win some games recently, and we can’t look past anybody with where we’re at now. We need to make sure we show up and ready to play here.”

“Expect to play them the way we like to play, obviously we know this team a lot from last year in the playoffs,” said Carrier. “We know exactly what to expect, just have to get our game going and get back to way the Golden Knights play normally.”

Aside from getting back on track, Vegas may have a little vengeance on their minds Thursday night, when they host to the team who ended their quest for a Stanley Cup seven months ago. Players say that is no longer on their minds, considering these two already played once this season, a 5-2 VGK win at the Bell Centre last November.

“More focused as a team to get our game back, get back in the win column and head back on the road with a little more confidence. Just play a good 60 minutes overall tonight, that’s what we’re focusing on.”

Max Pacioretty and Alec Martinez both skated at City National Arena on Thursday morning, neither will be available against Montreal, but DeBoer did say it’s possible they both travel with the team on their upcoming road trip and slot back into the lineup sometime next week.