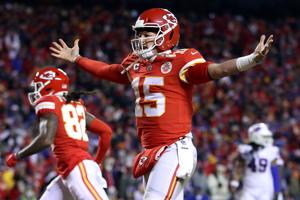 Did we just watch one of the best games in NFL history?

We definitely saw two great next generation quarterbacks on display at Arrowhead Stadium as Kansas City Chiefs QB Patrick Mahomes and Buffalo Bills QB Josh Allen put on an absolute clinic on Sunday night in an epic AFC divisional round clash in the NFL playoffs.

Mahomes threw a walk-off touchdown to Travis Kelce in overtime as the Chiefs finally beat the Bills 42-36 after an all-time encounter which saw twists and turns throughout.

The game culminated in a wild ending, which saw an extraordinary 25 points scored in the final 1:54 of regulation time.

With just 13 seconds left and the Chiefs trailing by three points, it seemed implausible that Kansas City could find a way back into the game.

But Chiefs head coach Andy Reid had some words of inspiration for Mahomes.

“When it’s grim, be the Grim Reaper and go get it,” Reid said he told Mahomes before the final drive of regulation. “So he did that. He made everybody around him better which he is great at and, you know, he just does it effortlessly. When it gets tough, he’s gonna be there battling and players appreciate that.”

And with the words ringing in his ears, the 26-year-old was able to get his team into position for a game-tying, 49-yard field goal from Harrison Butker.

In overtime, the coin toss became the deciding factor as the Bills and Allen never got back onto the field, the Chiefs driving all the way down the field before Kelce’s walk-off touchdown.

But the game will be remembered as one of the greatest in NFL history, and with two of the league’s best young quarterbacks at the helm, it could be a clash we see multiple times in the years to come.

“It was a heck of a game,” Mahomes told CBS’ Tracy Wolfson afterwards. “I mean, 17, Josh (Allen), played his a** off, pardon my language. I mean, it was a great game between two great football teams and, at the end of the day, guys like Tyreek (Hill) and Travis (Kelce) made the plays that won us the game.”

The Chiefs advance to host the Cincinnati Bengals in the AFC championship game next weekend after the Bengals beat the AFC No. 1-seeded Tennessee Titans on Saturday.

Mahomes is already a Super Bowl champion and Allen is an ascending superstar — hopes were high for a shootout between the two teams.

And from minute one, it didn’t disappoint. The Bills methodically drove down the field on the opening possession to score a touchdown, only for the Chiefs to reply immediately after.

Both teams’ defenses stood up during the next few possessions but once again, both offenses scored touchdowns as they went into halftime tied 14-14.

The scoring picked up right after the break, Kansas City settling for a field goal, before Mecole Hardman squeezed through Buffalo’s defense for a diving touchdown to extend the lead.

But an exquisite 75-yard touchdown pass from Allen to Gabriel Davis got the road team back into the game.

However, the scoring went crazy in the fourth quarter.

A 27-yard touchdown for the Bills to Davis on fourth-and-13 and a subsequent two-point conversion gave Buffalo a three-point lead with just 114 seconds remaining.

But, just moments later, a short pass from Mahomes to Hill was taken 64 yards to the house by the electrically quick wide receiver, once again giving the Chiefs the lead.

Yet again, Allen came firing back, this time needing just eight plays and 49 seconds to take his team 75 yards to connect with Davis and reclaim the edge with just seconds remaining.

It was Davis’ fourth touchdown of the night, and in the process, he became the first player in the Super Bowl era with more than 200 receiving yards and four or more receiving touchdowns in a playoff game.

With just 13 seconds left and from his own 25-yard line, Mahomes connected with Hill for 19 yards and Kelce for 25 yards to set up the game-tying field goal as time expired.

And in overtime, Mahomes didn’t give Allen the opportunity to get off the bench, going nine plays and 75 yards to send the Chiefs to their fourth straight AFC championship game.

“To be in this moment, in this game, against that team, to make a play to walk off a game at Arrowhead, I’ll remember this game for the rest of my life,” Mahomes said.

“It was definitely special to win a game like this at Arrowhead. Obviously, the Super Bowl was probably number one for me, but this one is right up there. To be able to come back a couple of times, get points when we needed to get points, score touchdowns, get in field goal range, I’ll remember it forever.”

Sunday night’s game was undoubtedly one of the best games of the season, but its ending left some feeling a tad unsatisfied.

The Chiefs won the overtime coin toss meaning they would receive the kickoff at the start of the extra 10 minutes.

Therefore, because Mahomes and the Chiefs were able to score a touchdown on the first possession of overtime, we never got to see Allen and the electric Bills offense respond.

The regulation didn’t sit well with some fans on Twitter, with some calling it the “worst rule in sports.”

Detroit Lions wide receiver Amon-Ra St. Brown also chimed in: “Great game by both teams but the overtime rules have got to change!! No coin flip should have that much power.”

But in the aftermath of the heartbreaking defeat, Allen didn’t blame the rules.

“The rules are what they are, and I can’t complain about that ’cause if it was the other way around, we’d be celebrating, too,” he said. “So it is what it is at this point. We didn’t make enough plays tonight.”