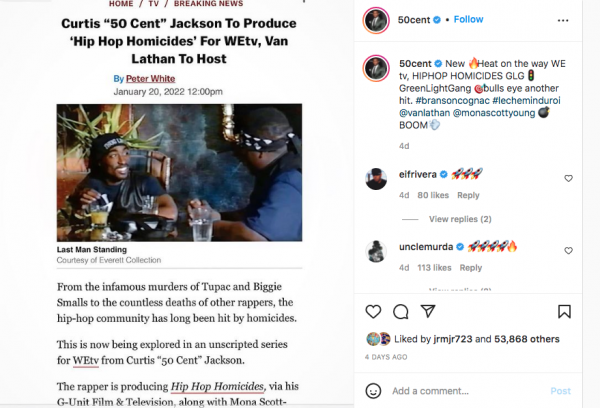 From every Hip Hop related homicide, including the most obvious, Tupac and Biggie, the show will delve into the specifics behind all of the unsloved killings in the Hip Hop community in an attempt to find out what actually happened.

In a statement explaining the purpose of the series, the television mogul said, “G-Unit Film and Television has thrived by telling real stories. As I continue to grow my current slate, premium non-scripted programming will be a major focus. Hip Hop loves things that are damaged. This series will shed light on the artists that didn’t make it through the struggle.” Mona Scott-Young added,  “50 and I created this show in response to the disturbing number of murders in Hip Hop. With this boots-on-the-ground investigative series, we will look to closely examine and explore leads surrounding these cases with the hope of finally providing loved ones with answers.”

The series is slated for later this year on WEtv and the streaming service ALLBLK.

The Source |Legendary Fashion Designer Thierry Mugler Who Dressed, Cardi B, Beyoncé, and Normani passes away at age 73