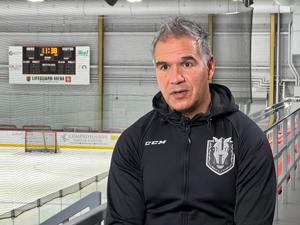 He will be behind the bench this Friday and Saturday when the team faces the Colorado Eagles at the Orleans Arena.

He released the following statement:

I am thrilled to be able to return to coaching and to once again be with my players and fellow coaches, whose support has been so significant throughout these last few months.

After recent tests and scans, my doctors have given me clearance to return to my fulltime duties with the team and my prognosis is very good. I would like to thank my family for their constant love and support. I want to thank my fellow coaches and my players, who were with me through every step of this journey. And I am grateful to my medical team and the Golden Knights organization for their commitment and resolve in fighting this battle with me.

Now I am ready to return behind the bench for the second half of the season and to lead this exceptional group of men towards the playoffs and a Calder Cup run.

Beginning this week, Silver Knights Head Coach Manny Viveiros will be taking a medical leave of absence, as planned, to undergo the next phase of his cancer treatment. He is likely to miss three to four weeks recovering from his procedure. Assistant Coach Jamie Heward will assume the lead role in the interim alongside Assistant Coach Joel Ward, Goaltending Coach Fred Brathwaite, and Video Coach Andrew Doty. We will provide additional updates regarding his status during the weeks ahead when appropriate.

Unfortunately, I’ve been diagnosed with prostate cancer. I had to take a leave of absence at the first part of the season. We’ve been trying at the very early stages a game plan of what we want to do going forward.

Now that we have one in place through the doctors, we have an opportunity now to go after this and treat this. I’ve been able to get back to work, which is, for me, a really important part of my life.

I’m going to be able to do that until about mid-December, and then I’m going to have to take another leave of absence for a short time to have the surgery done.

It started with a simple blood test. The staff and players at @GoldenKnights Training Camp went through physicals and everybody got a blood test. My PSA levels came back really high, and we did a follow up of another blood test and they came back very high again.

Right away the VGK medical staff set me up with a urologist here in Las Vegas. I went in and saw him and obviously he was very concerned right away. He checked me out and we ended up doing a biopsy and unfortunately it came back that I do have prostate cancer.

For almost a month we’ve been trying to form a game plan for how we’re going forward….You have to find out if it’s spread or not and if it has gone into your bones. There has been really good news in that regard that it hasn’t. That has a real positive impact toward my recovery.

Quite frankly, it probably saved my life. Just having a simple blood test. I’m at the age where I’m over 50 and in perfect health. You just never know. I figured if I feel good, there’s probably nothing wrong.

We’ve got some very positive news where the doctors are quite confident that we have a good chance of curing this and in fact beating it.

Today was my first day back with the guys [at practice] again. It’s good to surround yourself with people you really want to be with. Like I said, they are an extension of my family. It’s really important to be around these guys. I can’t wait to get back behind the bench.

We’re thrilled to share that Head Coach Manny Viveiros will be back behind the bench starting tomorrow with our 11 a.m. puck drop against BAK.We’re here with you every step of the way, Coach! 💜#HomeMeansHenderson

It wasn’t immediately clear if the leave would be immediate. The team’s season opener is Friday night.

The team provided the following statement:

Henderson Silver Knights Head Coach Manny Viveiros will be taking a non-COVID medical leave of absence from the team.

Assistant Coach Jamie Heward will assume the lead role in the interim alongside Joel Ward, Fred Brathwaite and Andrew Doty.

We will provide additional updates when appropriate.

Roethlisberger retires at 39: Time to ‘hang up my cleats’ | Las Vegas Sports