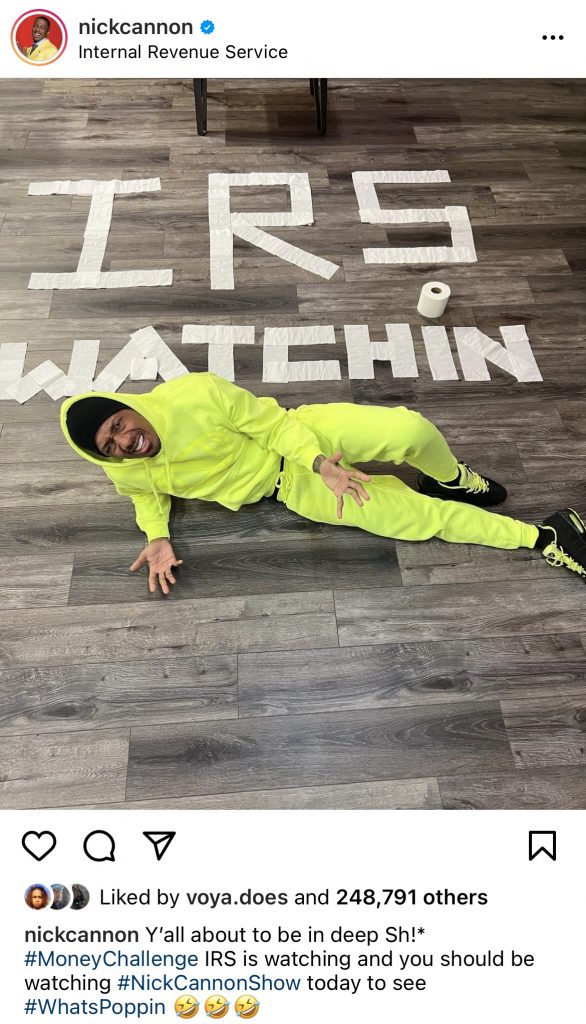 Major hip-hop artists such as the City Girls, Young Boy NBA, Lil Durk, and Future have been participating in the viral “money challenge” along with ordinary people in an attempt to flaunt their cash. But wherever there is a social media trend, there are also people looking to jokingly mock that trend- with Nick Cannon being the most recent celeb to poke fun at the challenge.

The “Money Challenge” is a viral social latest trend in which hip-hop artists, celebrities, and aspiring influencers post photos of themselves to social media spelling out various words using cash (usually $100 bills). YoungBoy and Lil Durk have reportedly used the challenge to continue their ongoing beef,

The trend has drawn criticism for a variety of reasons, namely that publicly flashing cash isn’t a smart way to keep your finances secret from the IRA. This week Nick Cannon used toilet paper to jokingly make that point while also promoting episodes of his upcoming show, captioning the hilarious picture with the following; “Y’all about to be in deep Sh!* #MoneyChallenge IRS is watching and you should be watching #NickCannonShow today to see #WhatsPoppin.”

While the money challenge as a social media trend might be new, both 50 Cent and Soulja Boy shared pictures of themselves spelling out words with cash in the past (“Broke” for 50 Cent and “Soulja Boy” for Soulja Boy).

With stocks and cryptocurrency taking a major hit in the market over the past week, Cannon’s toilet paper might be a valuable currency in the near future.

Wizkid to Perform Only Outdoor 2022 London Date at Yam Carnival

Nicki Minaj Announces New Single ‘Do We Have a Problem?’ with Lil Baby